Flies may Carry More Disease Than What was Previously Thought 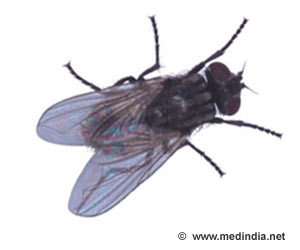 Flies can be more than pesky picnic crashers, they may be potent pathogen carriers, too, according to an international team of researchers. Flies may carry more pathogens than what we previously thought, found a new study published in Scientific Reports journal.

In a study of the microbiomes of 116 houseflies and blowflies from three different continents, researchers found, in some cases, these flies carried hundreds of different species of bacteria, many of which are harmful to humans.

Because flies often live close to humans, scientists have long suspected they played a role in carrying and spreading diseases, but this study, which was originally initiated at Penn State's Eberly College of Science, adds further proof, as well as insights into the extent of that threat.


"We believe that this may show a mechanism for pathogen transmission that has been overlooked by public health officials, and flies may contribute to the rapid transmission of pathogens in outbreak situations," said Donald Bryant, Ernest C. Pollard Professor of Biotechnology and professor of biochemistry and molecular biology, Penn State.
Advertisement
According to Stephan Schuster, former professor of biochemistry and molecular biology, Penn State, and now research director at Nanyang Technological University, Singapore, the researchers were able to investigate the microbial content of individual fly body parts, including legs and wings. The legs appear to transfer most of the microbial organisms from one surface to another, he added.

"The legs and wings show the highest microbial diversity in the fly body, suggesting that bacteria use the flies as airborne shuttles," said Schuster. "It may be that bacteria survive their journey, growing and spreading on a new surface. In fact, the study shows that each step of hundreds that a fly has taken leaves behind a microbial colony track, if the new surface supports bacterial growth."

Blowflies and houseflies -- both carrion fly species -- are often exposed to unhygienic matter because they use feces and decaying organic matter to nurture their young, where they could pick up bacteria that could act as pathogens to humans, plants and animals.

The study also indicates that blowflies and houseflies share over 50 percent of their microbiome, a mixture of host-related microorganisms and those acquired from the environments they inhabit. Surprisingly, flies collected from stables carried fewer pathogens than those collected from urban environments.

The researchers, who report their findings in the current issue of Scientific Reports, found 15 instances of the human pathogen Helicobacter pylori, a pathogen often causing ulcers in the human gut, largely in the blowfly samples collected in Brazil. The known route of transmission of Helicobacter has never considered flies as a possible vector for the disease, said Schuster.

The potential, then, for flies to carry diseases may increase when more people are present."It will really make you think twice about eating that potato salad that's been sitting out at your next picnic," Bryant said. "It might be better to have that picnic in the woods, far away from urban environments, not a central park."

Ana Carolina Junqueira, professor of genetics and genomics at the Federal University of Rio De Janeiro and previous postdoctoral fellow at the Singapore Centre for Environmental Life Sciences Engineering (SCELSE), said that the novel genomic and computational methods used for the study allowed the team an unprecedented look at the microbial community carried by flies.

Flies may not be all bad, however. The researchers suggest they could turn into helpers for human society, perhaps even serving as living drones that can act as an early-warning system for diseases.

"For one, the environmental sequencing of flies may use the insects as proxies that can inform on the microbial content of any given environment that otherwise would be hard or impossible to sample," said Schuster. "In fact, the flies could be intentionally released as autonomous bionic drones into even the smallest spaces and crevices and, upon being recaptured, inform about any biotic material they have encountered."

'Sting-O-Meter' That Tells You Which Insects Cause Most Pain
Scared of insect bites? Here's a sting-o-meter to help you find out which stings will hurt the ......

Dealing With Bedbugs
Since centuries, bedbugs are a source of menace for people around the globe. The insect generally .....