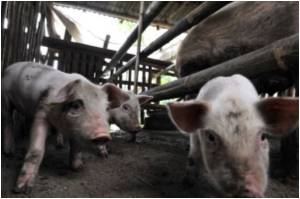 First case of foot-and-mouth in more than three years has been reported in South Korea, say officials.

The Agriculture Ministry said in a statement that the case had been confirmed in a pig farm in Uiseong in the eastern province of North Gyeongsang.

The foot and mouth disease virus tends to make African buffalo its reservoir for breeding, a new research suggests
Advertisement

"A close examination confirmed an outbreak of FMD at the Uiseong farm," the statement said.


South Korea had just regained its status as an FMD-free country in May at a meeting of the World Organisation for Animal Health in Paris.

The entire Korean peninsula suffered a devastating outbreak in 2011 that resulted in the culling of nearly 3.5 million cattle, pigs and other animals in South Korea alone.

The Chinese province of Hunan urged parents on Sunday to seek immediate treatment for children showing symptoms of hand, foot and mouth disease.
Advertisement
The Seoul government estimated the cost of that outbreak at $2.6 billion.

North Korea suffered an outbreak in February this year, triggering a rare offer of vaccine and medical equipment from the South.

China's health minister Wednesday denied reports that officials had tried to cover up an outbreak of a highly contagious illness.
Advertisement
Advertisement