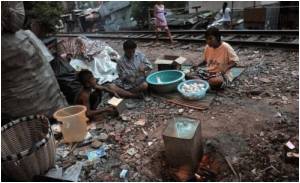 Babies of mothers who are malnourished during pregnancy may experience faster cognitive decline later in life, a study published Monday found.

Researchers led by Susanne de Rooij of the University of Amsterdam tested cognitive function in 737 Dutch adults aged 56-59, 40 percent of whom were exposed to famine in utero when Nazi Germany imposed a food blockade on Holland in the final months of World War II.

During the five to six months of famine, the Dutch population's daily rations dropped to as little as 400 to 800 calories, said the study, published in the Proceedings of the National Academy of Sciences of the United States.


While mild calorie restriction in adults can postpone aging and increase lifespan across many species, "caloric restriction occurring before birth has various negative effects on mental and physical health later in life," the study says.

Are you health conscious? If yes, go ahead to find out your approximate daily calorie requirement, which varies depending on the lifestyle and activities. This calculator indicates an approximate calorie requirement for a person having a normal lifestyle.
Advertisement
In the study, 64 seniors who were exposed to famine in the early stages of gestation did worse on cognitive-function tests that required them to do tasks like name the color of the word "blue" when it was printed in yellow ink, than seniors who were exposed later or not at all to hunger in utero.

The researchers also found that exposure to famine at any stage of the mother's pregnancy resulted in a smaller head circumference at ages 56-59.

"Head size is related to brain size and reduced size has been associated with decreased cognitive abilities in the elderly," they wrote.

The poorer performances of the malnourished-in-utero seniors on the selective attention task "may be an early manifestation of an accelerated cognitive aging process," the researchers wrote, but called for further testing later in life to confirm the hypothesis.

Nutritional Assessment Calculator helps to find out if you child is undernourished or malnourished.
Advertisement
Advertisement

Toxic chemicals found in the environment in the air, water, soil and even in day to day stuff we use can ...
This site uses cookies to deliver our services.By using our site, you acknowledge that you have read and understand our Cookie Policy, Privacy Policy, and our Terms of Use  Ok, Got it. Close
×