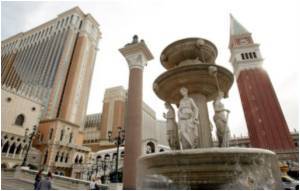 US gaming giant Las Vegas Sands is "very actively pursuing" plans to build a Las Vegas-style casino strip in Spain at a cost of up to 15 billion euros ($20.4 billion), its chief said Thursday.

Sheldon Adelson told the Foreign Correspondents Association in Singapore that Las Vegas Sands is already in talks with city officials from Barcelona and Madrid to build a gaming strip in either of their cities.

It is definitely a gamble to open a new resort complex when a disastrous recession has forced a casino and condo projects to be stalled in Las Vegas.
Advertisement

"I want to do a mini-Las Vegas in Europe. I hope we could use the name 'Europe Vegas' or 'Euro-Vegas' or something," he said.


"I want to build like 20,000-plus rooms and millions of square feet of shopping and MICE space," he added, referring to the meetings, incentives, conventions and exhibitions sector.

Brian Wu lifted his 6 year old daughter onto his shoulders at The Mirage hotel-casino so the girl could get a better view at the dragons dance to the loud drumbeats.
Advertisement
"Now, we are very actively pursuing it. I'm already building up a team of development professionals in architecture, design, project development etc. In two weeks I'm meeting with three huge general contractors to possibly build several places at once."

Adelson said the project would create 180,000 jobs, with investment costs unprecedented for a private company.

"This will cost close to 10 to 15 billion euros. No private sector company has ever invested that kind of money, and we need the support of the (Spanish) government," he stated.

The gaming mogul called on the national authorities in Madrid to set up a taskforce to fast-track their development plans as well as assign them a sizeable and suitable plot of land.

"Can you imagine having 10 Marina Bay Sands in a strip? Pretty ambitious project," he said.

It opened in April last year and visitors had since averaged a million a month, Adelson stated.

"We have 11 million visitors, about a million people a month here since we opened," he said.

Adelson expressed confidence that after all the attractions in the Marina Bay Sands open, Singapore's target of attracting 17 million tourists to the city-state in four years' time will be met.

He added that the Asian gaming market had unlimited growth potential, due to the Chinese "culture" of gambling.

"I don't think there's going to be any limit in this market. We will continue to grow, the only thing that I can't say with surety is how much."

Once-Booming Las Vegas may be Reduced to Ghost City

The housing market in Las Vegas is on the slide and many have already left for greener shores.
Advertisement
<< A Glass of Wine May Help Delay Dementia
Extreme Rains Caused By Greenhouse Emissions >>