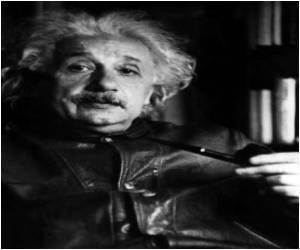 The brain of Albert Einstein can be downloaded as an application for 9.99 dollars. The exclusive iPad app, which will be launched on Tuesday, would make detailed images of Einstein's brain tissue more accessible to scientists than ever before.

According to the Age, a medical museum under development in Chicago obtained funding to scan and digitize nearly 350 fragile and priceless slides made from slices of Einstein's brain after his death in 1955.

For the first time ever, tiny slices of famed physicist Albert Einstein's brain have been put on public display at a Philadelphia museum.
Advertisement

The app has been designed by Steve Landers, a consultant for the National Museum of Health and Medicine Chicago, the report said.


It would let researchers to peer into German-born theoretical physicist's brain as if they were looking through a microscope, it added.

Albert Einstein and Winston Churchill Were Not Dyslexic Says Expert

Albert Einstein is one among the world's most reputed scientists but despite his countless professional successes, he suffered to sustain a thriving personal life, states a new book.

Blood - Sugar Chart Noscaphene (Noscapine) Loram (2 mg) (Lorazepam) Blood Donation - Recipients Find a Hospital Post-Nasal Drip Drug Interaction Checker Drug Side Effects Calculator Indian Medical Journals Accident and Trauma Care
This site uses cookies to deliver our services. By using our site, you acknowledge that you have read and understand our Cookie Policy, Privacy Policy, and our Terms of Use