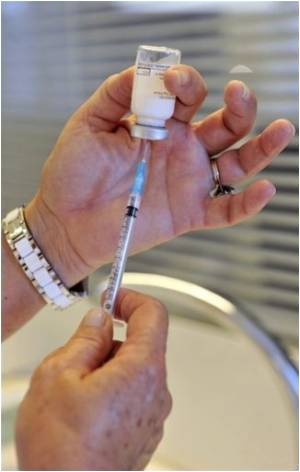 A potential vaccine against prostate cancer shows positive results after the completion of its second round of clinical trials, say researchers.

A decrease in specific prostate tumour antigens was observed with little or no production of testosterone, said Rodriguez, who leads a research team at the Center for Genetic Engineering and Biotechnology (CIGB) in Camaguey, a city 530 km east of Havana.


The Heber Provac vaccine is applied in advanced stages of prostate cancer but before the patient receives X-ray or chemotherapy treatment, in order to make hormonal suppression possible, he said.

Prostate cancer is fast gaining as a common cancer form among men; more threatening since its symptoms often go unnoticed until it's too late. This quiz tests your knowledge on prostate cancer, its diagnosis and treatment options and is as mandatory for men as the screening tests mentioned here are!
Advertisement
Another expert, Jesus Junco, said the vaccine designed to combat stage 3 and 4 malignant tumours should be as effective as or more effective than standard treatments in the future.

Researchers will study the vaccine's interaction with other drugs and make comparison with standard drugs and treatments used to fight the disease, he said.

Each year, more than 2,500 men develop prostate cancer in Cuba, most of them aged over 60, and 60 percent of the cases are fatal, according to official data.

Contamination Leads to Erroneous Link Between XMRV And Prostate Cancer