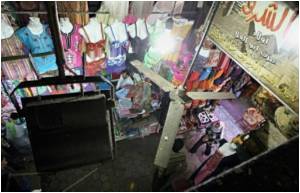 Hundreds of Egyptian tour guides gathered in the shadow of the Great Pyramids on Monday to plead with tourists to return to the Land of the Pharaohs following the fall of Hosni Mubarak's regime.

The upheaval of recent weeks and media coverage of days of violent clashes have combined to scare off visitors and stifle Egypt's key tourism industry, threatening thousands of jobs.

Cancer is Man-Made: Research On Egyptian Mummies Proves This Discovery

A study of ancient remains has found that cancer is a man-made disease fuelled by pollution and changes to diet and lifestyle.
Advertisement

Inspired by the success of political protests in bringing down the regime, workers in several public and private sector industries have launched a wave of strikes to demand pay rises.


But the message from tourism workers was simpler.

"Come back, reviens, komm wieder, vuelve!" they implored, against the postcard backdrop of the Great Pyramids of Giza and the Sphinx.

People are frustrated in Egypt during the Muslim holy month of Ramadan due to power and water cuts, soaring costs, scorching heat and anxiety over the country's supply of wheat.
Advertisement
The guides -- whose business has been badly hit by the crisis -- gathered at the plateau site, celebrating St Valentine's Day with banners in English, French, Russian and German reading: "Egypt loves you."

"Tourism is like a delicate bird, it flies off at the slightest sound. But there's nothing to fear here, quite the contrary," insisted 37-year-old guide Hazem Hashem.

Behind them a handful of Egyptian visitors were at the site, but there were no foreigners to be seen and Cairo's hotels and gift shops stand empty.

"We need to make tourism come back to Egypt. We want to send the message to tourists all over the world that they are welcome here," said 27-year-old Hossam Khairy.

Khairy was one of the tens of thousands of protesters who seized central Cairo's Tahrir Square and occupied it for two weeks as part of the nationwide demonstrations that bought down Mubarak.

He feels that rather than scaring off visitors, the revolution should act as a draw, showing the world that Egyptians share the values of freedom enjoyed elsewhere.

"They'll discover a new country, a new people," Khairy said. "Before, when tourists asked me questions about the president, I was ashamed when I had to pretend that we were a democracy."

Some of those working at the pyramids opposed the revolt, fearing it would harm their trade.

Workers from tourist stables charged the demonstration on horses and a camel during an attack by stone-throwing pro-regime thugs on February 2.

On Monday, however, politics was forgotten and the guides were simply concerned with persuading their foreign guests to return.

"The return of tourists is in our interest, but also in the interest of the entire country," said Hashem.

Some 16,000 unionised tourist guides work on Egypt's ancient sites, earning around 300 to 500 dollars per month in peak times, but most have been without pay now for three weeks, according to 34-year-old guide Oncy Khalil.

"We lost our income to win our freedom," he shrugged.

Tourism accounts for six percent of Egypt's gross domestic product, and February would normally be the height of the holiday season.

The sector brought in $13 billion in 2010, with a record 15 million people taking their holidays in the Land of the Pharaohs.

Alongside the guides, coach drivers, camel handlers, souvenir sellers, hotel waiters and taxi drivers have had a thin few weeks.

Shabula Abzimir shows visitors the ribs of his famished steed, crying out: "There is no business, no Americans. My horse can't eat, my family can't eat. This is not war, come back!"

Strikes by government employees have erupted throughout the country to demand higher wages and benefits, despite Egypt's newly formed government vowing to raise public sector salaries and pensions by 15 percent.

Egypt has always been a preferred destination for rich Arab tourists, who find the climate salubrious and the entertainment interesting.
Advertisement
<< Berlin Film Festival Moved to Tears With Chinese AIDS Film
Researchers Probe the Parkinson's-Mitochondria Link >>