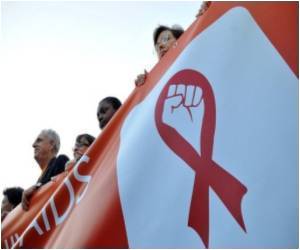 A heart-wrenching documentary about AIDS sufferers in China and the discrimination they face in their daily lives has won a rapturous reception at the Berlin film festival.

Based on interviews and emails with a wide range of HIV positive people, director Zhao Liang said he hoped the film, Zai Yi Qi ("Together"), could change attitudes in China, where at least 740,000 suffer from the AIDS virus.

An increased awareness of the need to fight HIV/AIDS, has encouraged rich countries to increase their funding for health programs in developing nations more than fourfold between 1990 and 2010.
Advertisement

Zhao used Internet chat groups to track down many of his subjects, the vast majority of whom refused to show their face for fear of "letting their family down". Several declined to appear on camera at all.


The stories moved many in the audience to tears.

One 30-year-old drug user, known only as "Duckweed", explained how when she found out she had the virus, she planned to kill herself and her four-year-old son, also infected.

Awareness about AIDS was spread through a bike rally in Chennai on the eve of World AIDS day.
Advertisement
"I couldn't see the point of living any more, so I bought some rat poison and put it in our rice. My boy wanted to eat the rice straightaway," she said sobbing.

"But then I thought, 'how can I let him leave the world after only a few years of life?' I changed my mind, I threw the rice away."

Another interviewee plays a recording of his mother's reaction when he tells her he plans to appear in the documentary.

"How can you do this to the family? You're such a disappointment," she tells him. "This should not be exposed."

The three main characters are Hu Zetao, an 11-year-old boy, Liu Luping, his carer and Xia, a stand-in actor. All three worked on the set of a previous Chinese film about AIDS, "'Til Death Do Us Part," by director Gu Changwei.

In this "film-within-a-film", Zhao shows how the discrimination against the HIV positive people on the set turns over time into compassion and affection.

At first, one elderly crew member, unaware there were HIV positive people on set, says: "Anyone with this sickness knows he should never say anything because otherwise people will keep their distance. I would keep my distance."

Another set member, upon learning his friend is HIV positive, suddenly cannot bring himself to look at him, prompting the jibe: "Don't worry, you can't get it from being stared at."

Zhao also takes the audience to Hu's home, where he lives with his father and stepmother after his mother died of AIDS.

His family, unaware of how the virus can be transmitted, will not allow him to put his chopsticks in the dinner pot like everyone else and he has his own washing utensils.

"The film tries to counter the discrimination and stigma that many AIDS sufferers still face in China," Zhao told the audience after receiving a tumultuous reception.

"Before making this film, I knew very little about this disease and the goal is to make more Chinese people understand better how AIDS is transmitted and how it affects sufferers," he added.

Experts say there is still a major gap in public knowledge about the virus in China, where it has overtaken rabies and tuberculosis as the country's leading cause of death among infectious diseases.

According to a recent poll of 6,000 people, nearly half thought it could be transmitted by mosquito and almost one in five believed they could catch it if an infected person sneezed on them.

The poll also suggested that the stigma attached to AIDS was still rife, with around one-third saying that infected people "deserved" their condition because of drug use or their "promiscuous" sexual activities.

In one of the film's lighter moments, Hu explains his own unique way of dealing with discrimination.

"Then they run really fast."

Though emotional in parts, the film is ultimately about the hope the sufferers have in a brighter future and their bravery in struggling against a wave of discrimination, on top of their debilitating condition.

Zhao said three of his subjects had decided to show their faces after all, in the hope it could boost understanding.

Xia, one of these, said: "If my face can help promote tolerance, then there is no need to cover it."

The film is screening out of competition at the Berlin film festival, which runs until February 20.

A social group conducted a painting exhibition in Chennai to spread awareness about HIV and also to collect funds to improve welfare of patients.
Advertisement
Advertisement