Eels Fast Diminishing in the Environment 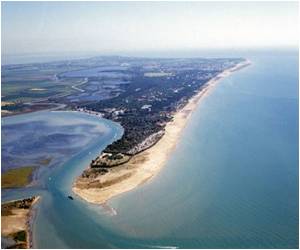 Cupping a tiny, translucent eel in the palm of his hand, New York environmental researcher Chris Bowser shook his head in amazement. "This is worth about one dollar," he said.

As every spring, baby eels -- big black eyes at the end of bodies the size of earthworms -- are wriggling their way from the Atlantic into rivers all along the North American coast.

Bowser, who works with the New York State Department of Environmental Conservation, calls it "one of the greatest, most mysterious migrations on the planet."


But there are fewer and fewer eels making that journey.

And the imbalance between eel stocks around the world and demand in Asia, where "unagi" has a prized place on Japan's sushi menu, is driving prices to caviar levels.
Advertisement
In Maine, the last big US fishery for glass eels, as the young see-through ones are known, the creatures are aquatic gold.

Prices reached a record $2,600 a pound ($5,720 a kilo) in the 2012 season, Maine fisheries authorities say -- which equates roughly to a dollar an eel. By comparison, the New England state's famous lobsters fetched only $2.69 a pound.

Crazy prices might be good news for a few, including poachers, but really the eel rush reflects a gathering disaster.

European Union-funded research found that numbers of young eels in the eastern Atlantic have fallen some 95 percent from their peak. Asia is witnessing a similar crisis: Japan put the eel on its red list of endangered species in February.

In North America, Canada has seen a precipitous drop and introduced severe fishing restrictions, while US authorities classify the fish as "depleted."

Maine, and to a lesser extent South Carolina, are the sole US states allowed to issue commercial licenses for glass eel harvesting. And a May 21 meeting of the Atlantic States Marine Fisheries Commission could impose new restrictions.

But Kate Taylor, with the fisheries commission, says so little is known about the "very mysterious" eel that US authorities have a hard time deciding what to do.

"There's a lot of uncertainty," she said in a phone interview.

Standing knee-deep in the burbling Quassaick Creek in Newburgh, outside New York, Bowser peered into a funnel-shaped fyke net he'd set to snare glass eels coming out of the sea.

The net was part of a survey which Bowser, helped by students from nearby Mount Saint Mary College, is conducting to get a handle on eel numbers and habits.

The captured eels had just swum from the Atlantic up a section of the broad Hudson River, past an oil terminal, then left into the Quassaick, which runs beneath a busy rail and road bridge before rising into the hills.

Students carefully scooped the wriggling creatures -- who would later be released -- into a bucket. "Feels like spaghetti in your hand, except it moves," one volunteer said.

They found 240 specimens, way down from previous counts over the last week, something Bowser said likely reflected the lunar tide cycle, which was currently moving away from a full moon.

But understanding eel numbers on a more global scale is a lot tougher.

No one even knows for sure where in the Atlantic eels are born, although decades of partial evidence point to an enigmatic patch of the ocean called the Sargasso Sea.

From there, millions of miniscule new eels somehow navigate on Atlantic currents toward either North America or Europe. Again, no one knows how these flimsy little creatures know which way to go, or how they survive the journey.

On arrival in the spring, they ascend rivers with fierce determination, even crawling over the ground when they encounter an obstacle, and make their home in muddy water many miles inland.

Transformed into freshwater fish, the eels take on their familiar serpentine form, measuring up to five feet and their skin turning yellowish.

Then between 10-20 years on, sometimes even later, the odyssey happens again, except in reverse.

The adult eel abruptly abandons its peaceful river, transforms back into a sea creature, and retraces its infant journey to the ocean.

In this final stage, the eel's yellowish tint has become silvery, its eyes enlarge for underwater vision and the digestive system shuts down. Living off its own fat, the eel -- for no known reason -- now swims hundreds, or even thousands of miles back to the Sargasso.

There, for the first and last time in its life, the starving eel mates. And dies.

Bowser, whose official role is public educator for the New York State Department of Environmental Conservation and Cornell Water Resource Institute, asked his group of first-year college students to inspect a glass jar containing an adult yellow eel about a foot long and full of twisting life.

"Will she try to get out? Absolutely!" Bowser cheerfully warned. "And is there going to be screaming and chaos if she does get out. Absolutely!"

On cue, the creature wriggled its head from the jar and flopped right out, falling into the dirt. Screams ensued. Panicked hands dropped the jar, which smashed.

If eels are literally hard to grasp, their inner workings are even more baffling.

The ancient Greek philosopher Aristotle was the first to write about the eel's puzzling origins. He noted that they live both in rivers and the sea, and speculated that they might be born spontaneously from mud.

In the 19th century, a young Sigmund Freud spent months dissecting eels in search of their sexual organs, not realizing that they have none until their final stage of life.

Today, understanding of the eel remains extremely limited. Even the reasons for its shocking decline are uncertain.

Although frantic Asian demand is one source of pressure on eel stocks, too many river dams, pollution and draining of wetlands are also blamed. Oceanic changes and a parasite could be at fault.

The obvious solution of breeding eels in captivity has so far been a failure.

There are many farms in China, Taiwan and South Korea, with Japan their key market, but they raise wild glass eels, including many of those caught in Maine.

No one has figured out how to breed the fish on a commercially viable basis -- or even seen them breeding in the wild.

Clearly the eel has many human admirers. But at this stage, friends are what it needs.

Anastasia Frank, an 18-year-old biology and chemistry student with Bowser's monitoring group, says she has come to appreciate an endangered animal lacking the cuteness, say, of a panda or rare bird.

Scientists Revive DNA of Extinct Frog
The genome of an extinct Australian frog was revived and reactivated by a team of scientists....

Japan May Become Extinct in 1,000 Years: Experts
Researchers unveiled a population clock predicting that Japan could theoretically become extinct in ...