by Himabindu Venkatakrishnan on  December 9, 2014 at 2:02 PM Tropical Disease News 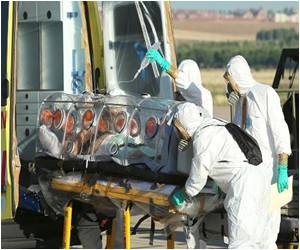 Dozens of vehicles, food and medical kit will be delivered by Dutch navy transport ship Karel Doorman on Friday, in the fight against Ebola, as it returns to West Africa, officials said Monday.

"The Karel Doorman will set sail on Friday loaded with vehicles, medical equipment and protective clothing for aid workers, as well as 1,500 tonnes of food for the World Food Programme," the Dutch Defence Ministry said in a statement.


Amid the cargo are "some 50 vehicles including ambulances, utility vehicles, 40 containers of clothing including protective suits, beds and 1,700 crates of rice," it said.


The Royal Dutch Navy's largest ship last month undertook a similar mission to drop off aid in Sierra Leone, Liberia and Guinea -- three of the countries hardest hit by the outbreak, which has left 6,000 dead and overwhelmed health services.

The first of the aid is to be loaded in the southern Dutch port city of Vlissingen, after which the ship will sail to La Rochelle in France and Gibraltar for additional supplies before heading to the Gulf of Guinea.

The United Nations is leading international efforts to beat back the Ebola outbreak, which the Security Council has declared a threat to world peace and security.

So far, the Netherlands has contributed 37.8 million euros ($46.4 million) in the fight against Ebola. Over the weekend the first Nigerian UN peacekeeper infected with the virus arrived in the Netherlands for treatment.

Facebook Sharing List is Topped by World Cup and Ebola
Among the list of topics shared by Facebook users around the globe in 2014, football's World Cup and the Ebola outbreak were on the top, the social networking giant said Monday.
READ MORE

Drug ToxicityWhy Do We Eat - Nutrition FactsDiet Lifestyle and Heart DiseaseHunger Fullness and Weight ControlLabel Lingo on Food Items: DecodedTips for Healthy Fasting During RamadhanTop Diet Foods that Make you FatTop Food for DietersSelenium - Natural Source Better than Supplements
Sign up for Wellness Consult a Doctor Sign up for Selfcare