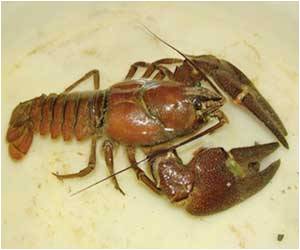 New study suggests people to avoid eating raw crayfish, as it could result in a severe parasitic infection.

Researchers at Washington University School of Medicine in St. Louis have diagnosed a rare parasitic infection in six people who had consumed raw crayfish from streams and rivers in Missouri.

The cases occurred over the past three years, but three have been diagnosed since last September.


Before these six, only seven such cases had ever been reported in North America, where the parasite, Paragonimus kellicotti, is common in crayfish.
Advertisement
"The infection, called paragonimiasis, is very rare, so it's extremely unusual to see this many cases in one medical center in a relatively short period of time," said Washington University infectious diseases specialist Gary Weil, professor of medicine and of molecular microbiology, who treated some of the patients.

"We are almost certain there are other people out there with the infection who haven't been diagnosed. That's why we want to get the word out," he added.

Paragonimiasis causes fever, cough, chest pain, shortness of breath and extreme fatigue. The infection is generally not fatal, and it is easily treated if properly diagnosed. But the illness is so unusual that most doctors are not aware of it.

The half-inch, oval-shaped parasitic worms at the root of the infection primarily travel from the intestine to the lungs. They also can migrate to the brain, causing severe headaches or vision problems, or under the skin, appearing as small, moving nodules.