E-Bandage Can Speed Up Wound Healing 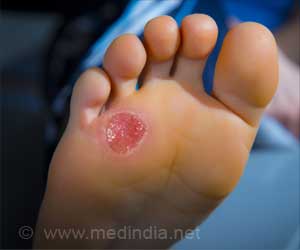 Self-powered bandage developed by scientists was found to generate an electric field over an injury, dramatically reducing the healing time for skin wounds.

Wounds covered by electric bandage, or e-bandage, closed within three days, compared with 12 days for a control bandage with no electric field, showed the findings published in the journal ACS Nano.

Smart bandages that are designed to check how well a wound is healing and to deliver drugs appropriately could change the approach to treatment of chronic wounds
Advertisement
‘The self-powered electric-dressing modality could lead to a facile therapeutic strategy for nonhealing skin wound treatment.’
Tweet it Now

As early as the 1960s, researchers observed that electrical stimulation could help skin wounds heal, but its application has remained limited as the equipment for generating the electric field becomes often large and may require patient hospitalisation.


Researchers Weibo Cai and Xudong Wang from University of Wisconsin-Madison in the US and their colleagues wanted to develop a flexible, self-powered bandage that could convert skin movements into a therapeutic electric field.

A commonly used drug to treat hypertension, valsartan can be formulated as a topical gel to accelerate wound healing without side effects.
Advertisement
To power their e-bandage, the researchers made a wearable nanogenerator by overlapping sheets of polytetrafluoroethylene (PTFE), copper foil and polyethylene terephthalate (PET).

The nanogenerator converted skin movements, which occur during normal activity or even breathing, into small electrical pulses.

This current flowed to two working electrodes that were placed on either side of the skin wound to produce a weak electric field. The team tested the device by placing it over wounds on rats' backs.

The researchers found that wounds covered by e-bandages healed faster than a control bandage with no electric field.

The researchers attribute the faster wound healing to enhanced fibroblast migration, proliferation and differentiation induced by the electric field.

A smart bandage has been designed helps in healing chronic wounds or battlefield injuries, as it is loaded with multiple medications.
Advertisement

Bleeding diathesis is a severe condition characterized by an increased tendency of the body to ...