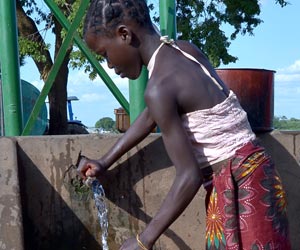 How did drought conditions in rural Lesotho put young girls at risk for HIV? Explains the new study. During the study, it was found that teenage girls and young women in rural areas of drought were also more likely to engage in high-risk behaviors, including sex work, and were more likely to drop out of school.

Upon further research, they found out that they were doing it to survive in the drought-affected regions.


Adolescent girls exposed to severe drought conditions in rural Lesotho had higher rates of HIV, according to a new study led by researchers at ICAP at Columbia University, a global health organization based at the Columbia Mailman School of Public Health, and from the Lesotho Ministry of Health and U.S. Centers for Disease Control and Prevention. Adolescent girls and young women in rural areas of drought were also more likely to engage in high-risk behaviors, including sex work, and were more likely to drop out of school. The findings are published in the journal PLOS Medicine.


‘In the study, the researchers observed an increase in young girls starting to be sexual early and being less educated. These figures were consistent with the girls being removed from school for transactional partnerships or marriage so that families could benefit from the bride price. ’

In Lesotho, a small country in southern Africa, one-fourth of adults are living with HIV. In addition to this challenge, all of Lesotho was affected by a severe drought in 2014-16, which in some areas was the most severe since 1981. Researchers paired satellite-derived data on accumulated rainfall with geospatial data from the survey to determine if there were any associations between drought and HIV related outcomes. Of those interviewed in the survey, 94 percent lived in areas that experienced drought, and according to prior research, approximately one-quarter of the population required emergency food assistance.

The researchers identified they also observed an increase in early sexual debut and reduced educational attainment in girls in rural areas consistent with the girls being removed from school for transactional partnerships or marriage so that families could benefit from the bride price.

According to the researchers, lower school enrollment could have far-reaching consequences, in terms of both HIV acquisition and entrenchment of poverty.

In addition, external migration, commonly seen during drought periods, was associated with a higher prevalence of HIV in young people; this is particularly concerning as migrants may have less access to HIV care.

"The impact of climate change on human health is becoming increasingly evident," the authors write. "Climate extremes are often associated with changes in behavior as people struggle to survive in the face of the loss of agricultural production. As people, particularly women, address their food insecurity, they may be less likely to take steps to protect themselves from HIV infection. ... There is also concern that food insecurity could lead to decreased access to antiretrovirals (ARVs) because of economic constraints or decreased adherence or absorption of ARVs."

The researchers conclude with a call for a coordinated policy and strategy to attenuate the effects of drought on HIV infection in southern Africa. "Potential interventions should minimize these shocks by targeting the myriad factors contributing to vulnerability and could include cash transfers to encourage families to keep children in school and avoid early marriage, provided to rural families in times of food shortage, and expanded programs for adolescent girls and young women, sex workers, and migrants, including pre-exposure prophylaxis (PrEP). In light of the anticipated acceleration of such climatic extremes, more research is urgently needed on improving the resilience of crops to drought to mitigate the severity of impact on household incomes and public health."

"This is the first paper to link climate shock to an HIV epidemic since antiretroviral drugs became more widely available in sub-Saharan Africa," said Jessica Justman, MD, senior technical director of ICAP at Columbia University and principal investigator of the PHIA Project. "We should view this as another kind of warning that climate change will affect us in unexpected and unwelcome ways."

On January 16, the Government of Lesotho, the U.S. President's Emergency Plan for AIDS Relief (PEPFAR), the U.S. Centers for Disease Control and Prevention (CDC), and ICAP announced the final results of the Lesotho Population-based HIV Impact Assessment (LePHIA) survey. The new data shows remarkable strides the government is making toward controlling its HIV epidemic. The number of people tested and aware of their HIV status was higher than initially reported in 2017 (81 percent today vs. 77 percent in 2017), and the annual HIV incidence is slightly lower (1.1 percent today vs. 1.5 percent in 2017). According to Andrea Low, the findings suggest that Lesotho is making good progress against HIV, but that future drought might lead to setbacks in epidemic control.

Molecular Decision Making Factors Such As Cell Size Found In HIV
In this study, the scientists have found that within a dormant population of HIV, only larger host cells reactivate while the smaller cells remain silent or latent (dormant). The scientists have focused on eradicating this latent reservoir of the ...
READ MORE

New Ways By Which HIV Testing Can Be Made Effective Discussed
Lay provider HIV testing in Vietnam offers a new model to connect at-risk populations with antiretroviral therapy.
READ MORE