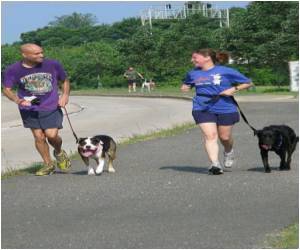 Dogs are personal trainers who keep their owners physically active even in dark and chilly winters, reports a study from the University of Calgary, where winters are brutally cold.

The research team led by Prabh Lail, a third-year medical student at the University, took a survey of 428 Calgarians, randomly chosen, of whom 11 had dogs. They completed two surveys, one in winter and one in summer which showed the researchers how owning a dog influenced physical activity in all seasons. So the objective was to study the relationship between dog ownership and physical activity, especially through the icy winters of Calgary.

Lail reports, "We wanted to compare dog owners to non-owners. What we found was that dog owners have higher levels of recreational walking across all seasons. They don't seem to have that drop-off in winter as many non-owners do."


"Our research program is about what can help people stay healthy. Physical activity is tremendously important for that."

They discovered that when dog owners get out and walk their pets, it encourages others to walk, too. This makes the neighborhood closer and hence, safer. While owning a dog has always been known to be conducive to good health, "It's not just a good news story for those with dogs, it's a good news story for community health and well-being," says Melanie Rock, director of the Population Health Intervention Research Centre at the faculty of medicine at the University.

Exercise is about revamping your lifestyle, not just weight loss. Exercise to get healthy - that way, you'll last longer at it and get better results.
Advertisement
Although it may not be possible to have a dog for a pet, Patricia Cameron, executive director of the Calgary Humane Society, recommends that Calgarians take their friend's or neighbor's dog for a walk or join the 857  volunteers who walk dogs awaiting adoption.

It is important for us to understand the power of daily exercise. Only then can we motivate ourselves to inculcate the habit of exercise on a daily basis.
Advertisement
<< Link Between Increased Salt Intake and High Blood Pressure ...
Cannabis Oil Cures Brain Tumor in Toddler >>