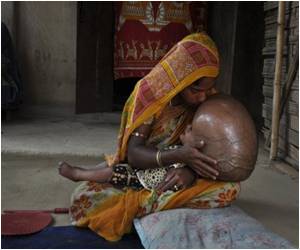 The Indian girl whose head was swollen to nearly double its normal size is doing well, but the treatment procedure could be complicated, said doctor.

Roona Begum, who suffers from hydrocephalus, a rare disorder that causes fluid to build up on the brain, was discovered earlier this month living with her parents who are too poor to pay for life-saving treatment.

Scientists Discover Clue to Cause of Childhood Hydrocephalus

Scientists have found what may be a major cause of congenital hydrocephalus, one of the most common neurological disorders of childhood.
Advertisement

The publication of pictures taken by an AFP photographer in remote Tripura state in northeast India last week saw a top hospital in Delhi offer to examine the child and led well-wishers abroad to set up an online donation fund for her.


Roona's condition has resulted in her head swelling to a circumference of 94 centimetres (37 inches), putting pressure on her brain and making it impossible for her to sit upright or crawl.

An international team of researchers from Uganda and the United States say that hydrocephalus in Ugandan children and other developing countries is seasonal
Advertisement
Her doctor, leading Indian neurosurgeon Sandeep Vaishya, who heads neurosurgery at the flagship hospital run by the private Fortis Healthcare group near New Delhi told AFP, "the child is doing well so far".

But he added: "Her case is very complex so we are currently considering options of how best to proceed."

The most common treatment involves the surgical insertion of a mechanism known as a shunt, which drains cerebrospinal fluid out of the brain and towards another part of the body where it can be absorbed easily into the bloodstream.

In Roona's case, however, the huge size of her head relative to the rest of her body complicates matters, according to Vaishya.

"Her head is several times larger than her abdomen, so we have to consider how that much fluid will be absorbed by her body if we put in a shunt," Vaishya said.

"I am also worried because she has developed a skin condition on the base of her head, suggesting that her scalp is quite delicate, so a shunt could pierce through and leak fluid through the skin, causing other problems," he added.

Local doctors had told Roona's parents to take the newborn to a private hospital in a big city but the costs were too high for her 18-year-old father, Abdul Rahman, an illiterate labourer who earns 150 rupees ($2.75) a day.

The website for donations to Roona can be viewed at www.mygoodact.com/collectiondetailperson.php?id=212. It has already raised more than $34,000.

The US government's National Institute of Neurological Disorders and Stroke estimates about one in every 500 children suffers from hydrocephalus.

A top private hospital in New Delhi has contacted the girl's parents, offering to fly them to the capital for tests.
Advertisement
<< Traffic Pollution Boosts Heart Disease Risk
Spain to Tighten Abortion Laws, Irrespective of Criticism >>