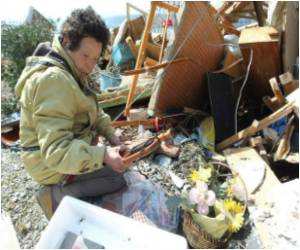 Scientists have developed a new device to detect disaster victims trapped in large piles of rubble.

The prototype technology, called Finding Individuals for Disaster and Emergency Response, or FINDER, can locate individuals buried as deep as nine meters in crushed materials, hidden behind six meters of solid concrete, and from a distance of about 30 meters in open spaces.

With dozens of artists and writers, four Nobel prize winners have joined forces to demand that access to books be made a priority for disaster relief, once victims' basic needs have been met.
Advertisement

"FINDER is bringing NASA technology that explores other planets to the effort to save lives on ours," Mason Peck, chief technologist for NASA and principal advisor on technology policy and programmes, said in a statement.

A breath and sweat detector could help locate survivors buried under buildings hit by an earthquake or a bomb blast.
Advertisement
"The technology has the potential to quickly identify the presence of living victims, allowing rescue workers to more precisely deploy their limited resources," Price said.

The device works by beaming microwave radar signals into the piles of debris and analysing the patterns of signals that bounce back, a radar technology regularly used by NASA's Deep Space Network to locate spacecraft.

The device can detect heartbeats and breathing patterns of the survivors.

"We also verify that the breathing and heartbeat are consistent with a human, so we don't detect small animals or some mechanical device like a pendulum," Lux said.

Mobile phone positioning data can be used to monitor population movements during disasters and outbreaks, according to a study published in this week's PLoS Medicine .
Advertisement
<< Omega-3 Fatty Acids may Not Help Boost Thinking Skills
Commonly Prescribed Statin Drug Linked to Memory Impairment >>