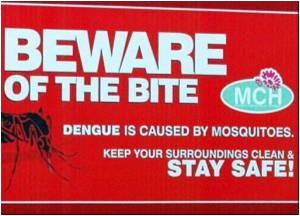 Some 31 people have died in an outbreak of dengue fever across much of Latin America since the start of the year.

There is no vaccine for dengue, a mosquito-borne viral disease endemic to tropical regions across the world, including Asia and Africa.

Since January 1, nearly 46,600 confirmed or suspected cases have been detected in the region, according to an AFP tally based on official figures.


Those deaths include at least 14 in Peru's northeastern Amazon jungle region, eight in Colombia, five in Paraguay and four in Bolivia.

In 2010 the disease killed 1,187 people across Latin America, according to Pan American Health Organization (PAHO) figures. Some 1.8 million cases were detected, the PAHO said.

Encyclopedia section of medindia gives general information about Dengue and Dengue Hemorrhagic Fever
Advertisement
"The Americas has seen a dengue epidemic over the past years, with an increase in certain countries," said PAHO spokesman Daniel Epstein. In Venezuela, for example, 125,000 cases were reported in 2010, nearly twice the figure from the previous year.

In Peru, health authorities recently declared a red alert in Peru's northern Amazon jungle region following the outbreak of what they described as a "very aggressive" dengue strain.

Dengue is endemic to the jungle region, but until now Peru has largely dealt with the American strain of the disease.

Now authorities are facing "a new variety that we did not know in Peru and that probably entered from Brazil via the Amazon," Health Minister Oscar Ugarte told local reporters on Tuesday.

A senior Peruvian health official, Hugo Rodriguez, told AFP that the strain is known as the Asian-American variety, and unlike the American variety produces severe shock among victims.

"It is a combination of both varieties," Rodriguez said.

Peru, Paraguay and Cuba have begun fumigation programs in an attempt to diminish the number of mosquitos.

Brazil launched an ad campaign that features a national football team star kicking a ball at an animated mosquito dressed with the colors of Argentina, its historic football rival.

In Colombia, health authorities are keeping a sharp eye out for cases after unusually heavy rain in December and January, the National Health Institute said.

The Aedes mosquito that transmits the disease lives in urban areas and lays its larvae in stagnant water, the PAHO said.

"The main tool to fight dengue is education," Epstein said.

People must learn to drain all stagnant water from pots, buckets, and any outside containers where the mosquitoes could lay their larvae, he said.

Dengue especially affects the poor who have no running water and rely on water containers.

According to World Health Organization (WHO) figures, there are some 50 million cases of dengue around the world each year. Of those, half a million are of the potentially deadly hemorrhagic variety.

How to Reduce School Bag Weight - Simple Tips Blood Pressure Calculator Vent Forte (Theophylline) The Essence of Yoga Pregnancy Confirmation Calculator Turmeric Powder - Health Benefits, Uses & Side Effects Drug Side Effects Calculator Find a Hospital Daily Calorie Requirements Noscaphene (Noscapine)
This site uses cookies to deliver our services.By using our site, you acknowledge that you have read and understand our Cookie Policy, Privacy Policy, and our Terms of Use  Ok, Got it. Close
×