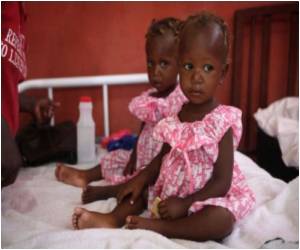 The death toll from cholera epidemic in Haiti is nearing 7,000, which experts claim to be one of the worst in recent decades.

Jon Kim Andrus, deputy director of the Pan American Health Organization, said that as of December, on top of the deaths, the Haitian government had reported more than 520,000 cholera cases with 200 new sufferers appearing each day.

Andrus said it was "one of the largest cholera outbreaks in modern history to affect a single country."


There are also 21,000 cases in the neighboring Dominican Republic where there have been 363 deaths, Andrus said at a briefing for the second anniversary of the January 12, 2010 earthquake which killed more than 225,000 people.

Interactive section of Medindia gives details regarding waterborne disease
Advertisement
The cholera outbreak erupted in October, 2010 and has been widely blamed on a camp of UN peacekeepers from Nepal. Lawyers representing victims have demanded the United Nations pay hundreds of millions of dollars in compensation.

Andrus said Haiti needed a huge campaign to improve its supply of drinking water which various international institutions had estimated could cost between $746 million and $1.1 billion.

The international community has already given impoverished Haiti $2.4 billion in humanitarian aid in response to the quake.

Rebeca Grynspan, a UN under-secretary general at the UN Development Programme, said about 50 percent of the quake debris had been cleared -- some five million cubic meters of concrete and tangled steel.

In contrast to the WHO recommendations, some researchers advocate the use of antibiotics in moderate as well as severe cases of cholera.
Advertisement
News A-Z
A B C D E F G H I J K L M N O P Q R S T U V W X Y Z
What's New on Medindia