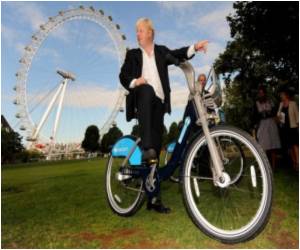 Looks like the whole of Europe is cycling its way to good health! In the tug of war for supremacy as in pedals versus horsepower, two wheels against four, cycling has the upper hand in Europe with bike sales now outpedalling car sales across the Old Continent, from Rome to Copenhagen.

More bicycles were sold than cars last year in 26 of the European Union's 28 members, the exceptions being Belgium and Luxembourg, according to data from the cycle industry body Coliped and the auto industry association ACEA.

Car sales have been slumping since the start of Europe's economic crisis, in what the head of FIAT Sergio Marchionne has gloomily dubbed a "Carmageddon", settling at 12 million units for the EU excluding Malta last year.


By contrast bikes have proved pretty much crisis-proof with 19.7 million sold Europe-wide in 2012 according to Coliped.

The phenomenon spreads well beyond the traditional "bicycle capitals" of northern Europe, Amsterdam and Copenhagen.
Advertisement
In southern European countries -- many of them traditionally car-mad -- the shift is striking, with Italians buying 1.6 million bikes against 1.4 million cars in 2012.

"The economic crisis has had an impact on all areas of people's lives, including on transport," said Giulietta Pagliaccio, head of the Italian cycling federation Fiab.

"But there has also been a small revolution in terms of lifestyle."

Italy's cycle manufacturer Bianchi agrees that change is on the march.

"Customers these days want bikes they can commute with, and top of the range. They are looking for long-term investments," said Bianchi's head Bob Ippolito, whose firm recently branched out into electric bikes.

"That backs up the sense that people are turning away from cars."

Milan has been one of the latest European cities to roll out a bike-sharing scheme, dubbed "Bikemi", on the model of the Parisian "Velib", as well as extending its network of cycle lanes.

For the Bucharest in-crowd, cycling is now the way to roll, with fashionable bars featuring bicycles as design objects and collective bike rides staged on a weekly basis.

In Spain, 780,000 bikes were sold last year against 700,000 cars, in spite of complaints from bike users who say the country's cities remain dangerous on two wheels.

Madrid is rolling out a new bike rental scheme next year, and has unveiled plans for a "green ring" of cycle paths looping 10 kilometres around the city centre.

According to Spain's road traffic agency, while the number of cyclists is steady, they are using their bikes more and more often. Cycle use for everyday journeys has jumped from 17 to 30 percent.

In austerity-hit Portugal cyclist numbers are on the rise in cities like Lisbon and Porto, although not so much in the country's mountainous regions.

"There are more and more people cycling, as a fashion thing, but also for economic reasons," said Pedro Carvalho, head of the magazine "B-Cultura de Bicicleta".

On the streets of London, bicycles are now as common a sight as black cabs or red double-decker buses, with journeys by bike up 66 percent over a decade.

The city is now under pressure to provide more safe, segregated cycle lanes, despite a pledge to invest £1 billion ($1.6 billion, 1.2 billion euros) over the next decade.

As young Europeans switch to two wheels in droves, the car may be losing some of its appeal as a status symbol.

That was certainly true for 23-year-old Parisian Hugo Clair, who gave up his car and replaced it with two bicycles.

"With fuel costs going up, it was really grating to have to spend 100 euros a month just to keep a car on the road."

Source: AFP
Advertisement
<< Better Dosing Could be Key to Effective Malaria Treatment in...
Transgender Issues to be Discussed at Health Meet in India >>

Target Heart Rate During Exercise
Embarking on a fitness regime? Find out what your safe heart rate zone while exercising....