Could Short Sight Problems and Summer Births in Twins be Related? 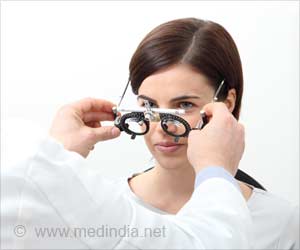 Twins born during the summer season and those who play video games a lot are at an increased risk of short-sightedness (myopia), finds a new study. The findings of this study are published in the British Journal of Ophthalmology.

Summer birth and hours spent playing computer games are linked to a heightened risk of developing short or nearsightedness (myopia) in childhood, indicates a twin study.

Spending more years in full time education is associated with a greater risk of developing short-sightedness (myopia), found research.
Advertisement
‘In the study, it was found that the fertility treatment provided some kind of protection against myopia and was associated with a 25-30 percent lower risk in children. According to the researcher's children born as a result of fertility treatment are often born smaller and slightly more premature, and so this may have some level of developmental delay, which might account for shorter eye length and less myopia.’

But fertility treatment may be protective, the findings suggest.


Myopia is defined as a refractive error, meaning that the eye can't focus light properly. The result is that close objects look clear, but distant ones appear blurred.

Children exposed to the least outdoor light have faster eye growth and faster myopia progression which can be put away by increasing time outside.
Advertisement
It can be corrected with prescription glasses, laser surgery, or contact lenses, but the condition is linked to a heightened risk of visual impairment and sight loss in later life.

Genes are thought to have a role, but they don't fully explain the rising prevalence. And given the rapid development of the eyes in early life, the researchers wanted to explore potential contributory environmental factors across the life course.

They studied 1991 twins whose age was 16.7 years, on average. The twins were all born between 1994 and 1996 in the UK, and taking part in the long-term Twins Early Development Study (TEDS).

Opticians provided information from their eye tests about myopia, and the researchers analyzed demographic, social, economic, educational and behavioral factors in the twin pairs from when these children were 2,3,4,7,8,10,12,14, and 16 years old, to capture critical stages of child and eye development.

Parents and teachers filled in comprehensive questionnaires and the twins did web-based assessments to provide a wide range of background and potentially relevant information on factors that might have influenced early life development.

The average age at which children with myopia started wearing glasses to correct the condition was 11. Around one in 20 (5.4%) had a 'lazy eye' (amblyopia) and a similar proportion (nearly 4.5%) had a squint. Overall, one in four (26%) of the twins was myopic.

The factors most strongly associated with the development of myopia across the various time points were the mother's educational attainment (university or postgraduate level), hours spent playing computer games, and being born during the summer.

Hours spent playing computer games may not just be linked to close working, but also to less time outdoors-a factor that has previously been linked to heightened myopia risk.

Educational level has also been linked to myopia, and a child in the UK born in the summer months will start school at a younger age than those born during the winter months, the researchers suggest that this earlier close work may speed up eye growth which is responsible for short-sightedness.

Higher levels of household income and measures of intelligence, particularly verbal dexterity scores, were associated with heightened risk, but to a lesser extent.

Fertility treatment seemed to afford protection against myopia and was associated with a 25-30 percent lower risk. The researchers speculate that children born as a result of fertility treatment are often born smaller and slightly more premature, and may have some level of developmental delay, which might account for shorter eye length and less myopia.

This is an observational study, and as such, can't establish cause, say the researchers, highlighting that future research may be able to look at the interplay between genetic susceptibility and environmental influences.

In a linked editorial, Drs Mohamed Dirani, Jonathan Crowston, and Tien Wong, of, respectively, the Singapore National Eye Centre, Centre for Eye Research, Melbourne, Australia, and the Department of Surgery, University of Melbourne, point out that environmental factors are now thought to have a greater role than genetic ones.

They add that the study involved data gathered before the explosion in digital media.

"The rapid adoption of smart devices in children adds a new dimension to how we define and quantify near-work activity," they write...The role of smart devices, quantified as device screen time (DST) must also be investigated."

And children start using these devices at an increasingly younger age. "The increased DST resulting from gaming, social media, and digital entertainment has led to a rise in sedentary behavior, poor diet and a lack of outdoor activity," they suggest.

"The use and misuse of smart devices, particularly in our pediatric populations, must be closely monitored to address the emerging phenomenon of digital myopia," they conclude.

A special contact lens can slow the progression of myopia. In certain cases it could even halt the short sight problem altogether.
Advertisement
<< Poor Aerobic Fitness in Kids May Up Type 2 Diabetes, Heart D...
Observing Mutations in MicroRNAs That can Contribute to Dise... >>

Gene Discovery Behind Short-sightedness Could Lead to New Treatments

Researchers at Duke University Medical Center have uncovered a gene linked with myopia or nearsightedness in Caucasian people from several different regions,