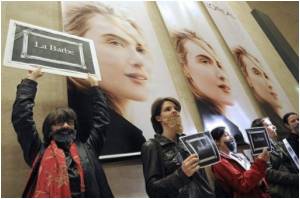 European Union regulators have enforced a ban on the import and sale of cosmetics which contain ingredients tested on animals. They also wish to inspire other nations to take up this cause and follow suit.

The ban, which will take effect immediately is an example of how much animal welfare means to Europe. The European Union had completely banned animal testing of finished cosmetic products in 2004. Four years back, the second ban on animal-tested ingredients became effective.


"Europe's idea is to put more pressure on other parts of the world to end animal testing, but the science doesn't match that political timetable," said Colin Mackay, a spokesman for Cosmetics Europe, a trade association.

Mr. Borg said that Europe is committed to the cause of developing alternatives to testing cosmetics on animals and will lead by example of "responsible innovation in cosmetics without any compromise on consumer safety. "

Japan Cosmetics Giant Shiseido Drops Animal Testing
As the European Union gets set to finalise a sweeping ban on the sale of such products later this .....

Govt Urged To to Consider Nation-wide Ban of Use of Animals for Testing Cosmetics By PETA
A PETA official met the Deputy Drug Controller and urged him to consider the possibility of a ......

Research Details Cell-Based Alternative to Animal Testing
It is well-documented that European legislation restricts animal testing within the pharmaceutical ....

Pamela Anderson Calls On EU To Ban Cosmetics Testing on Animals by 2013
Pamela Anderson has written a letter to European Union (E.U.) officials requesting them to ......