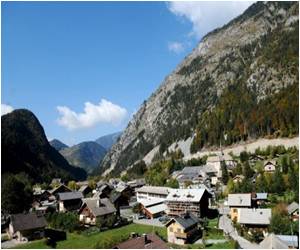 Multiple factors - some natural, like climate change; some human-made, including large-scale landscape alterations and shifts in trade routes - led to the 9th century collapse and abandonment of the Central Maya Lowlands in the Yucatan Peninsula.

These findings, resulted from a new analysis of complex interactions between humans and the environment preceding the collapse of the ancient Maya, have lessons for contemporary decision-makers and sustainability scientists.

A new study reveals that the risk of extinction of cold blooded tropical species due to climate change may not be as high as previously thought.
Advertisement

In their revised model of the collapse of the ancient Maya, social scientists B.L. "Billie" Turner and Jeremy "Jerry" A. Sabloff provide an up-to-date, human-environment systems theory in which they put together the degree of environmental and economic stress in the area that served as a trigger or tipping point for the Central Maya Lowlands.


The ancient Maya in this hilly and riverless region confronted long-term climatic aridification, experienced decadal to century-level or longer droughts amplified by the landscape changes that they made, including large-scale deforestation indicated in the paleoecological record.

Grasslands Might Remain Resilient to Drought, Climate Change Thanks To Diversity

Researchers say that Grasslands across the world are more likely to tolerate the increased periods and intensity of drought that are predicted with climate change in the future.
Advertisement
Previous to the collapse, the Maya occupied the area for more than 2,000 years, noted researchers, "a time in which they developed a sophisticated understanding of their environment, built and sustained intensive production [and water] systems, and withstood at least two long-term episodes of aridity."

They document the human-environment interactions that were severely stressed during the 9th century arid phase.

"This environmental stress was complemented by a shift in commercial trade from across the peninsula to around it, which reduced the economy of the ruling elite to keep up the livelihood infrastructure to prevent the tipping point," said Turner, a Distinguished Sustainability Scientist with the Global Institute of Sustainability at Arizona State University.

The researchers noted that the Maya case lends insights for the use of paleo- and historical analogs to inform contemporary global environment change and sustainability.

They described the Classic Period of the Lowland Maya (CE 300-800) as a "highly complex civilization organized into networks of city-states," in their perspective article published in the online Early Edition of the Proceedings of the National Academy of Sciences.