Cold Meats a Potential Cause of Cancer 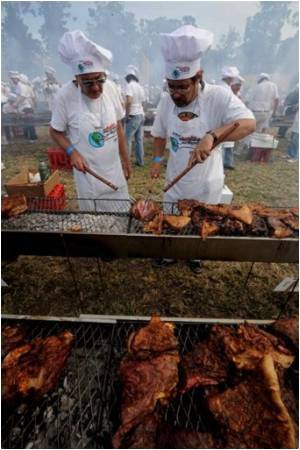 Eating red meat has come under fire once again as its harmful potential is being discussed in the light of new information.

Already linked with an increased risk of cardiovascular disease and certain cancers, including cancer of the pancreas, red meat was found by a team of US researchers to be a possible cause of bladder cancer, a study published in the journal Cancer said.

For those who can't do without their bacon-cheeseburger, some good news: scientists found no associations between beef, bacon, hamburger, sausage or steak and bladder cancer.


But they did observe a "positive nonlinear association for red meat cold cuts" and bladder cancer, they said.

The culprits in the cold cuts are nitrates and nitrites which are added to meat when it is processed to preserve and enhance color and flavor.
Advertisement
"Nitrate and nitrite are precursors to N-nitroso compounds (NOCs), which induce tumors in many organs, including the bladder, in multiple animal species," the study says.

For the study, scientists assessed the intake of nitrates, nitrites and other components found in red meat, in some 300,00 men and women aged 50-71 year, in eight US states, and its relation to cancer.

The study participants were followed up for up to eight years. During that time, 854 were diagnosed with cancer of the bladder.

The scientists found that people whose diets were high in nitrites from all sources, not just meats, and people who got a lot of nitrates in their diets from processed meats, like cold cuts, had a 28 to 29 percent greater chance of developing bladder cancer than those who consumed the lowest amount of either compound.

The scientists also found that people who ate the most red meat were younger, less educated, less physically active, and had lower dietary intake of fruits, vegetable, and vitamins C and E than those consuming the least red meat.

The researchers, led by Dr Amanda Cross of the National Cancer Institute, also found that the biggest carnivores among us were more likely to be non-Hispanic white, current smokers, to have a higher BMI, and to consume more beverages and total energy daily.