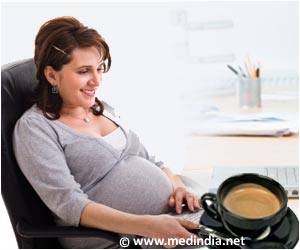 Along with nutrients and oxygen, caffeine feely passes the placental barrier, but the developing embryo does not express the enzymes required to inactivate it efficiently. The WHO currently suggests a limit of 300mg per day during pregnancy but some countries recommend a limit of 200mg, which can be less than a single cup of coffee from some high street cafes.

To investigate the impact of maternal caffeine during pregnancy on babies, a research team from the Norwegian Institute for Public Health used information about mother's diet and birth details collected over ten years. After excluding women with medical and pregnancy-related conditions almost 60,000 pregnancies were included in the study. All sources of caffeine were monitored in the study: coffee, tea, fizzy drinks, as well as food including cocoa-containing cakes and deserts and chocolate.


Explaining their results, Dr Verena Sengpiel, from Sahlgrenska University Hospital, Sweden, who led the project said, "Although caffeine consumption is strongly correlated with smoking which is known to increase the risk for both preterm delivery and the baby being small for gestational age at birth (SGA). In this study we found no association between either total caffeine or coffee caffeine and preterm delivery but we did find an association between caffeine and SGA. This association remained even when we looked only at non-smoking mothers which implies that the caffeine itself is also having an effect on birth weight."
Advertisement
In fact they found that caffeine from all sources reduced birth weight. For a child of expected average weight (3.6kg) this equates to 21-28g lost per 100mg caffeine per day. But it was not just caffeine, but the source of caffeine, which affected pregnancy outcomes. Caffeine from all sources increased the length of the pregnancy by 5hr per 100mg caffeine per day, but caffeine intake from coffee was associated with an even longer gestational length - 8hr extra for every 100mg caffeine per day.

This association means that it is not just the caffeine in coffee which increases gestational length but either there must be a substance in coffee which is responsible for the extra time or there is a behaviour associated with coffee drinking not present in women who drink only tea (for example). SGA babies are at higher risk of both short term and lifelong health problems and it seems from these results that since even 200-300mg caffeine per day can increase the risk of SGA by almost a third these recommendations need to be re-evaluated.

Office Coffee Mug: Home for Bacteria
Office coffee mug could be carrying colonies of germs, making it a home for bacteria, says expert....