Survival Saga of a British Teen in the Australian Outback 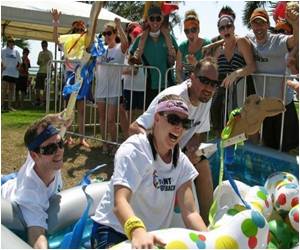 Read this ordeal of a British backpacker who got lost in the Australian outback for three days and almost died due to scorching heat and dehydration.

He somehow pulled along for three days drinking his own urine and contact lens solution before he could be rescued.


At scorching Australian temperatures, it is a miracle he is alive, courtesy the contact lens solution he found in his bag. He had also used some of his clothing like his shorts to create an SOS sign. He was spotted by rescuers about three miles away from the ranch and was almost dying.
Advertisement
Sam's kidneys were not functioning properly at the time of recue due to dehydration and he has lost about two stones in weight. Since he had run out of contact lens fluid, he had tried to drink his own urine. Fortunately, the helicopter had rescued him barely an hour before what would have an extremely life-threatening situation.

Mike Curtin from Queensland State Police said: "He was quite disorientated but, you know, his body seemed to bounce back fairly quickly once he knew that obviously he was located and so forth and he was quite happy of the fact that someone had found him."

Cautioning people about the harsh Australian climate and the importance of being informed while travelling or working in remote Australian Outback, he said, "It's one of those things and I think there's a lesson to be learned here from any of these young fellows who do take, or young boys and girls, who take jobs in areas like this isolated part of the state, to be careful, to be safe, and prepare. And never take the harshest Australian environment and our climatic conditions here for granted."