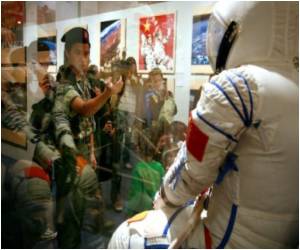 We should start thinking about what kinds of clothes astronauts will need for decades-long space missions, a University of Rhode Island professor has said.

Those questions might be answered soon. Aspelund just won a 15,000 dollars grant from URI's Council for Research to begin background research for the project, with the hope of eventually creating guidelines and prototypes.


Aspelund got interested in space apparel last year when he was sitting in his car in the driveway of his Warwick house listening to a National Public Radio report about the 100 Year Starship Initiative, a program aimed at inspiring travel beyond our solar system by 2112.
Advertisement
Later Aspelund sent an e-mail to NPR asking whether anyone had looked into apparel needs for a mission of this length.

An invitation followed from Mae Jemison, a former astronaut and leader of the Starship project, to attend a conference in Houston, where Aspelund intrigued engineers, astrophysicists and space-travel enthusiasts with his ideas.

The URI grant, awarded last month, allows him to rocket to the next level.

He also plans to research the ecological implications of the need to recycle space clothes, and he'll interview former astronauts from the International Space Station, scientists on Antarctic bases and submariners about wearing clothes in isolated and sometimes harsh conditions.

If all goes as planned, he hopes to have prototypes for a space simulation in 2014 and, in coming years, for the International Space Station, where someone would actually wear the clothing for weeks or months to test hygiene, durability and recycling possibilities.

Currently, astronauts at the International Space Station wear polo shirts and cargo pants, with lots of pockets. Dirty clothes and trash are put into a "supply craft'' that burns up on re-entry into the Earth's atmosphere.

More News on:
Space Travel and Medicine - An Introductory Editorial

Interspinous Spacer Implantation Less Invasive, Has Fewer Complications Than Spinal Fusion
A new study reveals that interspinous spacer implantation is not only a less invasive alternative .....

Green Spaces in Urban Areas Promote Physical and Emotional Well-being
A University of Exeter study has revealed the positives of having green spaces like parks and ......