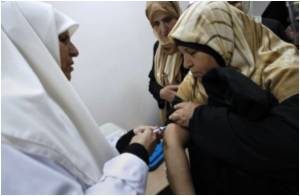 The daily newspaper Al-Watan reported that the first sports complex for women in Saudi Arabia has opened in the east of the ultra-conservative Gulf kingdom.

The paper said businesswomen and women personalities attended the inauguration of the centre in Al-Khobar province after it was given the go-ahead by the authorities.

Saudi Arabia, which applies a strict interpretation of Islamic or sharia law, bans men and women mixing in public and access for women in public areas.


Al-Watan said the complex, where women can engage in sports such as karate, practise yoga or attend fitness classes, is the country's first sporting centre for women.
Advertisement
The centre's director, Hanaa Al-Zuhair, said Saudi women who trained abroad -- including a karate black belt -- have been recruited to run courses at the centre.

Before the centre opened, women's sport in the kingdom had been virtually non-existent, although some young girls do take part in sporting activities at private schools under certain conditions.

Last year, Riyadh came under international pressure to allow two female athletes to compete in the Olympic Games in London.

The International Olympic Committee allowed a judo player and a runner to take part with their heads and body covered, in compliance with sharia law.

On May 19, 25-year-old Raha Moharrak became the first Saudi woman -- and the youngest Arab -- to conquer Everest, the world's highest mountain.

Death Toll Rises To 30 in Saudi Arabia Due to SARS-like Virus
The World Health Organization said that the global death toll from a SARS-like virus has risen to .....