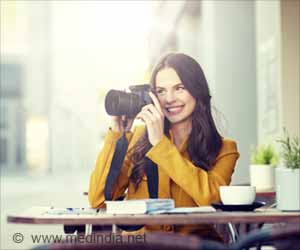 Clicking a picture daily and posting it on social media can be therapeutic and can also improve well-being, say researchers.

This is a popular social phenomenon, with Instagram having over 1.5million photos tagged #365 for each day of the year while there are thousands of members of Blipfoto, a key photo-a-day site.

Advertisement
‘Taking a photo each day and posting it online can improve mental health.’

A study co-authored by Dr Liz Brewster of Lancaster University and Dr Andrew Cox of the University of Sheffield recorded what photos people took, what text they added and how they interacted with others on the photo-a-day site for two months.


They found that taking a daily photo improved wellbeing through: Taking a moment to be mindful, and looking for something different or unusual in the day were seen as positive well-being benefits of the practice.
Advertisement
One participant said: "My job was a very highly stressful role... There were some days when I'd almost not stopped to breathe, you know what I mean... And just the thought: oh wait a moment, no, I'll stop and take a photograph of this insect sitting on my computer or something. Just taking a moment is very salutary I think."

It also led to more exercise and gave a sense of purpose, competence and achievement.

Another participant said: "It encourages me out of the house sometimes when I could just sit on my backside with a cup of tea. I'll think maybe I'll take a walk down on to the seafront and before I know it I'm two miles along the coast. " The online contact helped people to manage loneliness and grief as well as meeting new people with shared interests. Several participants had taken early retirement and found that the contact established via photo-a-day replaced some of the daily office chatter that they missed.

"There's the banter in the workshop or the office or the place where you work. And perhaps [photo-a-day] offers that... Because I'm having conversations with people that I would perhaps have had in the workplace.

The online interactions created a community based on the photos and accompanying text.

"It could be a rubbish photograph but if somebody commented on it, it made it worthwhile."

The online text was used to provide personal narratives, reminiscences, and explanations of repeated images.

"I'm ever feeling down or something it's nice to be able to scroll back and see good memories. You know, the photos I've taken will have a positive memory attached to it even if it's something as simple as I had a really lovely half an hour for lunch sitting outside and was feeling really relaxed."

The researchers said the practice is "an active process of meaning making, in which a new conceptualization of well-being emerges."

Source: Eurekalert
Advertisement
<< How Does Diet Influence the Start of Menopause?
How Could Brain Activities Be Controlled By Light? >>

Level of Detail Available in Digital Photography can Improve Forensics and Help Catch Criminals
The recent advances in digital photography, including the level of detail available, can be ......

Photography and Other Mentally Demanding Skills can Improve Cognitive Functioning, Study
Learning simple activities like photography can improve cognitive functioning among the elderly, a ....

World's Richest Photography Prize Bagged by Chinese Amateur
The world's richest photography award is bagged by a Chinese amateur whose image was that of a ......

Photographer Tackles Obesity by Self Photography
Photographer Jen Davis has always been comfortable in front as well as behind the camera....