Civic Polls Underway in Gujarat, With CM Casting Her Vote 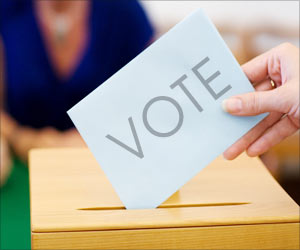 Gujarat Chief Minister Anandiben Patel cast her vote at a polling station in Ahmedabad, joining thousands of others in exercising their franchise in local body elections taking place in six cities of the state.

Celebrating the spirit of the ongoing navratri festival, the hospital staff erupted into a spontaneous 'garba' inside the intensive care unit of the hospital.
Advertisement
‘In Gujarat, the highest number of voters are registered in Ahmedabad, followed by Surat, Vadodara, Rajkot, Bhavnagar and Jamnagar.’

The Gujarat State Election Commission (SEC) has made elaborate arrangements for the polls, said its secretary Mahesh Joshi. Necessary security arrangements have also been put in place. Apart from Gujarat police and the SRP, 110 companies of the Central Reserve Police Force (CRPF) have been deployed, he added.


As many as 1,856 candidates belonging to different parties and independents are in fray for 568 seats in 143 wards of six municipal corporations. According to an SEC release, over 95.9 lakh voters have been registered for these six cities. Out of them, 51.1 lakh are male, while 44.79 lakh are female voters. The total number of polling booths are 12,616.

Gujarat also has the highest burden of hypertension with 159,150 cases reported as on March 2015 out of a total number of 715, 382, working out to about 22%.
Advertisement
<< Distinguished Journalist Adele Horin Dies of Lung Cancer at ...
Swedish Researchers Create 'Electronic' Plants >>

Dr. Manoj Vithlani said that green vegetables, sprouts in particular, seasonal and citric fruits are the new guard against the H1N1 influenza virus.