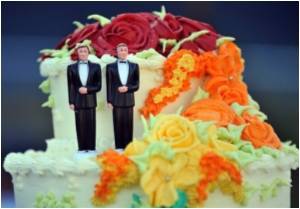 The congressional commission on human rights and minorities in Brazil has approved a text that would grant the Church a legal right to reject gay marriage if approved by lawmakers.

Same sex marriage is legal in the giant nation following a federal court ruling earlier this year, and same sex partnerships have been legally recognized since 2004.

More than 80 homosexuals have turned to New Zealand for their marriage after the law legalizing gay marriage was passed on a month ago, statistics reveal
Advertisement

But the commission, headed by evangelical pastor Marco Feliciano of the Social Christian Party, adopted a measure to allow the Church to reject those "who violate its values, doctrines and beliefs."


"The proposal wishes to avoid priests being penalized if they refuse to carry out marriages, baptisms and other ceremonies between homosexuals or their children," the parliamentary news service reported.

The Organizers of Gay Pride parade revealed that they will be launching another march in late October in the Montenegrin capital city of Podgorica.
Advertisement
The proposal outraged Socialist lawmaker Chico Alencar, who stormed: "This means the decriminalization of homophobia in churches. It harks back to the crusades; it is unconstitutional."

Brazil's constitution and justice commission will now assess if the proposal can go forward to full parliamentary and senate debate.

The commission triggered controversy earlier this year when it authorized psychologists to offer treatments designed to "cure" homosexuality as a disorder.

The proposal was shelved amid a storm of public protest.

Moldova to Abandon Plans to Ban Gay Propaganda for Minors

With one eye on gaining entry into the European Union, the Moldavian government revealed that it will not be imposing a ban on the promotion of homosexuality to minors.
Advertisement
<< Religious Gay Marriages Favored by Most Norwegian Bishops
Research Finds Sleep Helps Brain Stay Fit by Clearing Waste >>

How to Choose the Best Eczema-Friendly Moisturizer for Children?
View all
News Archive
News Resource
Advertisement
News Category
New Self-Powered Fabric Helps Correct Your Posture in Real-time! Harm Reduction in Current Tobacco Control Treaty  WHO's Critique Tobacco Epidemic Continues and is Far From Endgame Summer Camps: Safety Not Always a Priority for Most Parents International Tea Day: 5 Destinations to Celebrate This Day
More News
Sign up for Wellness Consult a Doctor Sign up for Selfcare