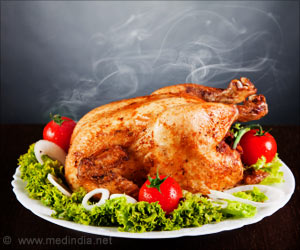 Making one substitution of poultry for beef could greatly reduce the carbon footprint, according to a study.

Food production is an important contributor to climate change, accounting for about a quarter of carbon emissions globally.

Greenhouse effect causes excessive heat to build up in the earth's atmosphere causing global warming and affects the environment and health.
Advertisement
‘Animal foods are known to contribute more to greenhouse gas emissions than plant foods.’
Tweet it Now

"We found that making one substitution of poultry for beef resulted in an average reduction of dietary greenhouse gases by about a half," said lead study author Diego Rose, PhD, professor and director of nutrition at Tulane University.


Rose will present the research at Nutrition 2019, the American Society for Nutrition annual meeting, held June 8-11, 2019 in Baltimore.

"To our knowledge, this is the only nationally representative study of the carbon footprint of individually chosen diets in the U.S.," said Rose. "We hope this research will raise awareness about the role of the food sector in climate change and the sizable impact of a simple dietary change."

The International Conference on Global Warming (GCGW-2012) will be held in Istanbul, Turkey on July 8-12, 2012. Take this quiz to learn what causes global warming, how it can affect your health, and what can be your contribution to contain it.
Advertisement
The new study is based on diet information from more than 16,000 participants in the 2005-2010 National Health and Nutrition Examination Survey. A portion of this survey asked participants to recall all the foods they consumed in the previous 24 hours. The researchers used this information to determine which foods had the highest greenhouse gas emissions and to calculate a carbon footprint for each individual diet.

They found that the 10 foods with the highest impacts on the environment were all cuts of beef and that about 20 percent of participants reported consuming one of these high-carbon foods.

Using simulation, the researchers calculated a new carbon footprint for each diet by replacing beef with the closest related poultry product. For example, a broiled beef steak was replaced with broiled chicken and ground beef with ground turkey. Each substitution was performed only one time for each person that consumed one of the high-carbon foods.

"Our simulation showed that you don't have to give up animal products to improve your carbon footprint," said Rose. "Just one food substitution brought close to a 50% reduction, on average, in a person's carbon footprint."

The researchers plan to expand this research, which focused on dietary greenhouse gas emissions, to include other environmental impacts such as water use.

Although not the subject of this study, they point out that food waste and overeating also increase the carbon footprint of our diet. Thus, in addition to eating low-carbon foods, better meal planning and eating of leftovers can also help reduce carbon footprint.

Wallace Smith Broecker brought global warming into common use with a 1975 article that correctly predicted that rising carbon dioxide levels in the atmosphere would lead to pronounced warming.
Advertisement

Do you know how a piece of charcoal can save you from snakebites and poisoning? Read more to know the ...
This site uses cookies to deliver our services.By using our site, you acknowledge that you have read and understand our Cookie Policy, Privacy Policy, and our Terms of Use  Ok, Got it. Close
×