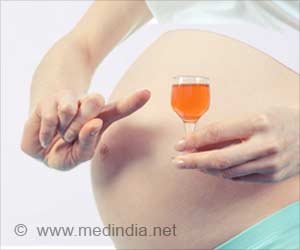 Drinking alcohol even at conception was found to damage placenta development, said study.

Although most women cease drinking once they know they are pregnant, the effect of alcohol during the initial stages of pregnancy, even as early as around the time of conception, is less well understood.

Now, Dr Jacinta Kalisch-Smith together with Professor Karen Moritz at the University of Queensland in Australia have investigated the impact of alcohol consumption on the placenta early in pregnancy.


They show that the growth of the placentas of rats that consumed alcohol around the time of conception was reduced significantly, providing new evidence for how pregnancy-related conditions develop. This research has just been published in the scientific journal Development at http://dev.biologists.org.

Women who were born underweight are at risk for hypertension or blood pressure during their pregnancy and this may be passed on to the next generation.
Advertisement
"We wanted to know whether early alcohol exposure could affect the development of the early embryo and the placenta. Using a rat model, we assessed the ability of the embryo to implant into the uterus, and, later, how well blood vessels formed in the placenta," explained Kalisch-Smith. Using this approach, the scientists were able to study changes that happen throughout the rat's pregnancy and found that even early exposure to alcohol (between 4 days before and 4 days after fertilisation) restricted the growth and function of the placenta.

"We found early alcohol exposure reduced blood vessel formation in the placenta, and this led to fewer nutrients being delivered to the embryo," said Kalisch-Smith.

Strikingly, the placentas of female embryos were particularly susceptible, with up to a 17% reduction in size and a 32% drop in blood vessel formation, limiting the ability of the placenta to transport nutrients.

"This has implications for human health by helping to explain, in part, why babies exposed to alcohol in the womb are often born small," said Kalisch-Smith. "It is important to understand the causes of low birth weight, because it has been shown to be an independent risk factor for diseases later in adulthood, such as type 2 diabetes, hypertension and obesity."

These observations provide an important basis for future research into pregnancy-associated conditions like fetal growth restriction. Kalisch-Smith added, "The next part of this project is to see whether nutrient supplementation can reduce or even prevent the adverse effects of alcohol exposure."

Women who take a combination of alcohol and the drug ecstasy during pregnancy may be exposing their offspring to grave danger.
Advertisement