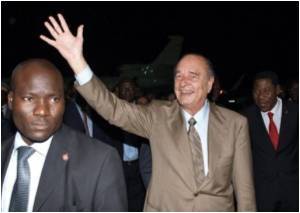 It has been reported that former President of France, Jacques Chirac could be avoiding trial for corruption through claims of suffering from Alzheimer's disease.

Journal du Dimanche reported that the former president, 78, had suffered from memory lapses, according to unnamed friends, and added that his wife feared he had Alzheimer's. But this was furiously denied by both, the former President and his wife, Bernadette.

He stands accused of embezzlement and breach of trust in a jobs scandal which involved the funding of party allies with taxpayers' money while he was mayor of Paris. A further charge of illegal conflict of interest was added last November.   He had immunity from prosecution until he left office in 2007.


Although the city of Paris, the original plaintiff in the case, withdrew its complaint after Chirac and President Nicolas Sarkozy's Union for a Popular Movement - the successor to the RPR - paid a 2.2-million- euro (3-million-dollar) settlement, a group of taxpayers has taken up the case.

Ageing is referred to the accumulation of changes that brings a person closer to death.
Advertisement
Journal du Dimanche had also referred to an incident that had taken place a year ago as evidence that he was suffering from Alzheimer's. But this has been criticized as a move to manipulate judges to drop the trial.

Old political friends of Mr. Chirac have been suggesting working for months to get the trial dropped.  Even former political enemies, such as Arnaud Montebourg, a Socialist politician, say that Mr. Chirac should be forgiven any alleged wrong-doing to thank him for having "kept France out of the Iraqi furnace in 2003".

But as his wife says, "He has always said that he wanted to be treated under the law just as anyone else. He must be treated no better but no worse than anyone else too."

Statins, the anti-cholesterol drugs, may help prevent the brain damage that leads to Alzheimer's disease, a new US study has found.
Advertisement
<< Thoughtful Eating for Weight Loss
Teenagers in Japan Using Flu Masks to Hide Themselves in Pu... >>