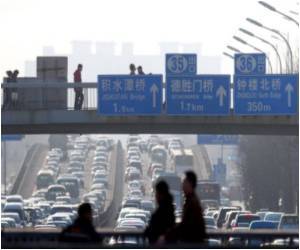 Pedestrians are flattened by trucks as they walk along China's highways, cyclists are flipped high in the air by speeding cars and sudden death haunts the anything-goes intersections in cities.

Global automakers may be salivating over massive car sales in the world's most populous nation, but hundreds of people die on China's roads each day -- and some of their deaths are shown in gruesome detail on television.

Death could be a leveler. But some are always more equal, even in death, at least in the US. Uninsured minority pedestrians hit by cars are at a significantly higher risk of death.
Advertisement

The carnage in Beijing alone is staggering, prompting a local television network to replay some of the most grisly accidents as a way to educate the thousands of new drivers that hit the capital's roads each day.


"Traffic Light" -- a joint production by Beijing Television and the capital's traffic police shown during the morning and evening rush hours, and again in the evenings -- is not for the faint of heart.

10 Minutes - to Save One-third Road Accident Victims from Dying

If the time taken by emergency services to arrive on an accident scene was cut down by 10 minutes, one-third of the victims would be saved from dying, calculate Spanish researchers.
Advertisement
"Sometimes a very simple mistake can turn into heavy regret -- an error in judgement can become the end of a vibrant life," host Fan Hongjun says in one of the most graphic segments entitled "Accidents That Should Not Happen".

Following the host's introduction, a large truck is shown crushing a Beijing cyclist -- flattening the rider with its front tyre and crushing his head with its rear tyres.

In another clip, a pedestrian is run over by a tourist bus turning off Beijing's major thoroughfare, the Avenue of Heavenly Peace.

The horrific accidents are shown repeatedly -- and in slow motion -- as a Beijing traffic policeman explains the mistakes made and the rules violated. Other topics covered include bike safety and the dangers of drunk driving.

The programme provides stark evidence of how little awareness of the most basic traffic rules there is among drivers, pedestrians and cyclists.

That was down from nearly 99,000 fatalities stemming from 450,000 accidents in 2005, when Chinese police say the nation's road carnage peaked.

But a study published earlier this month by the World Health Organisation's monthly Bulletin challenged the police statistics, saying that road fatalities tabulated by health authorities were nearly double the police numbers.

The study also revealed that road fatalities based on death registrations from 2002 to 2007 have not declined in recent years as the police say, but instead have increased as China's auto market has boomed.

"These inconsistencies strongly suggest that the decreasing trend in road traffic mortality shown by police-reported data may not be genuine," according to the study, carried out by Chinese and US researchers.

The study suggested that police were hoping to portray an improvement in the situation after years of efforts to improve traffic safety and urged the government to resolve the discrepancies.

Auto sales in China totalled 18.06 million units in 2010, an industry group announced this month, up 32 percent from the previous year, when the nation took the title of the world's top auto market from the United States.

In Beijing, a record 800,000 new automobiles took to the streets last year -- an average of nearly 2,200 new cars a day, ballooning the capital's fleet to around 4.8 million vehicles.

Such numbers mean that a lot of new, inexperienced drivers are trying to learn to drive on roads that are becoming increasingly hazardous -- a situation that has capital residents up in arms.

"These drivers have no morals -- they do not have any traffic awareness," one web user identified as Ahfeng said in a post on a video-sharing website where many clips from the show are available.

But not everyone says drivers are to blame.

"Today's society is tragic... everyone thinks that no one will ever hit them, they think they are tougher than steel," said a user codenamed csj320.

"Whoever runs a red light should be killed, no matter if it's a car or a pedestrian," said another not-so-charitable resident identified as roninew.

Officials at BTV, the producers of "Traffic Light" and the Beijing traffic police all declined comment about the show when contacted by AFP.

Some excerpts from the show can be accessed on the Internet at the following address: http://v.youku.com/v_show/id_XMjEyODAyNDc2.html.

The People In The Netherland Twisted In Their Own Success

The cycling in the Netherland which has become so famous amongst its inhabitants till the recent past has posing a great deal of problems arising out of fatal accidents, jam at the traffic lights.
Advertisement
<< End-Of-Life Decisions For The Critically Ill Easier If Fami...
New Molecule Discovery may Prevent Brain Cells Neurodegener... >>

Road Accident Risk Determined By Color Of Your Car

A new survey on usage of color of a car has observed that the color of a car plays a vital role to determine the chances of a road accident.
Advertisement
News A-Z
A B C D E F G H I J K L M N O P Q R S T U V W X Y Z
What's New on Medindia

Nutam (400mg) (Piracetam) Noscaphene (Noscapine) Indian Medical Journals Accident and Trauma Care A-Z Drug Brands in India Hearing Loss Calculator Post-Nasal Drip Drug Side Effects Calculator Pregnancy Confirmation Calculator Find a Doctor
This site uses cookies to deliver our services. By using our site, you acknowledge that you have read and understand our Cookie Policy, Privacy Policy, and our Terms of Use