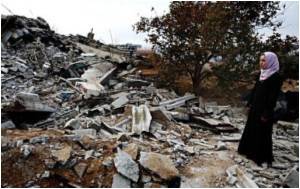 During the winter of 2008, a three-week armed conflict in the south of Israel and the Gaza Strip named "Operation Cast Lead" resulted in hundreds of rocket and mortar attacks on Israeli civilian populations. During this time children and their families spent hours and days in shelters amid threats to their survival.

Although the psychological effects of children's health are well-documented, local resources aimed at alleviating the negative outcomes of mass trauma are often overwhelmed. In the face of human-made or natural disasters, the school setting and teachers empowered to serve as "clinical mediators" can provide crucial role in assisting children in coping with exposure to trauma.

Combat-related post-traumatic stress disorder (PTSD) symptoms is associated with longer-term physical, emotional and symptoms, according to a report.
Advertisement

In a study published in the April 2011 issue of the Journal of the American Academy of Child and Adolescent Psychiatry (JAACAP), researchers report on the effects of an Israeli, teacher-based stress resistance intervention implemented in grade schools before the rocket attacks that occurred during Operation Cast Lead, compared with a non-intervention but exposed control group. This is the first known study to evaluate psychiatric outcomes in children who received stress intervention before the onset of mass trauma.


Mr. Wolmer, and Drs. Hamiel and Laor, from the Tel Aviv-Brull Community Mental Health Center, Donald J. Cohen and Irving B. Harris Resilience Center for Trauma and Disaster Intervention, and Child Study Center at Yale University evaluated 1,488 fourth and fifth grade Jewish students from a southern Israeli city that had been exposed to the continuous rocket attacks during Operation Cast Lead. Participating schools, chosen because of their proximity to the Gaza Strip, provided teacher training in stress resistance which focused on resilience building rather than directly addressing trauma symptoms. The teacher-led intervention was implemented at six schools three months before the traumatic exposure.

It has emerged that in the case of post-traumatic stress disorder, not all symptoms are created equal.
Advertisement
Utilizing two rating assessments, the UCLA-PTSD Reaction Index and the Stress/Mood Scale, the children self-reported on the frequency of symptoms related to stress, fear, and mood changes in the previous month. These symptoms align with those found in children experiencing posttraumatic stress disorder (PTSD).In the article titled "Preventing Children's Posttraumatic Stress After Disaster With Teacher-Based Intervention: A Controlled Study" Mr. Wolmer, and Drs. Hamiel and Laor, report that children who participated in the teacher-based intervention reported 50% fewer symptoms of posttrauma and stress as compared to the control group. For children with teacher-based intervention, the percentage of children meeting or exceeding the accepted cut-off score for PTSD was significantly lower, although mostly among boys.

Children with low socioeconomic status reported more symptoms of both scales than those with moderate and high socioeconomic status.The researchers conclude, '"The teacher based, resilience-focused intervention is a universal, cost-effective approach to enhance the preparedness of communities of children to mass trauma and to prevent the development of PTSD after exposure."

In a related editorial Dr. Joan Rosenbaum Asarnow states, "The article by Wolmer et al. (1) provides a compelling example of the value of pairing public health/program innovations with strong evaluation designs. The need to provide the best public health and treatment programs requires that the best science be mobilized to maximize program effectiveness." Dr. Arsarnow continues, "Finding optimal approaches to combining these public health/program initiatives with state-of-the-art evaluations to inform science is a critical task for the field."

Nearly a decade after the 9/11 twin tower attack, those evacuated still seem to suffer from some form of Post Traumatic Stress Disorder (PTSD), it is reported.
Advertisement
<< Self-Medication More Common in Women
Emergency Medical Services Streamlined By Targeting Top 911... >>