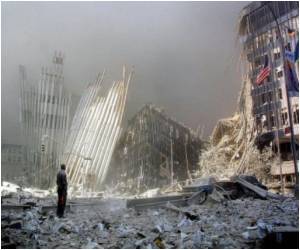 Nearly a decade after the 9/11 twin tower attack, those evacuated still seem to suffer from some form of Post Traumatic Stress Disorder (PTSD), it is reported.

In a study just released by Columbia University's Mailman School of Public Health, in conjunction with the New York City Department of Health and Mental Hygiene and the federal Agency for Toxic Substances Disease Registry (ATSDR), researchers found that of the 3,271 civilians who evacuated the Twin Towers, 95.6% of survivors reported at least one current posttraumatic stress symptom and 15% screened positive for PTSD, two to three years after the disaster. While past studies have examined PTSD prevalence among rescue and recovery workers, Lower Manhattan residents, other downtown building occupants, and passersby, this is the first study to focus specifically on people who were inside the towers when they were struck. The full study findings are currently online in the American Journal of Epidemiology.

PTSD is a psychiatric disorder that occurs after experiencing or witnessing events that threaten death or serious injury and that involves intense feelings of fear, helplessness, or horror and is the third most common anxiety disorder in the United States. The researchers report that five characteristics of direct exposure to the terrorist attacks were predictors of PTSD: a key driver was initiating evacuation late. Other predictors were being on a high floor in the towers, being caught in the dust cloud that resulted from the tower collapses, personally witnessing horror, and sustaining an injury. Working for an employer that sustained fatalities also increased risk. Each addition of an experience of a direct exposure resulted in a two-fold increase in the risk of PTSD.


The vast majority, 91% of survivors above the impact zone in 2 WTC, reported that they began evacuation after the first plane hit 1WTC. Overall, 60.8% were caught in the dust cloud from the tower collapses. Ninety-four percent witnessed horror, and 32% sustained an injury, ranging from a concussion to a sprain or strain. The overwhelming majority of survivors reported that the WTC was their usual place of work (95.8%).

PTSD in Early Stages can Be Treated With Psychotherapy

A recent study conducted at the American College of Neuropsychopharmacology has revealed that psychotherapy helps in treating the post-traumatic stress disorder (PSTD) in early stages.
Advertisement
The researchers found that women and minorities in particular were at an increased risk of PTSD, although the strongest demographic risk factor for PTSD in the study was low income. Survivors with incomes less than $25,000 per year were eight times more likely to have PTSD than those earning more than $100,000 per year.

The study was based on interviews with 3,271 English-speaking, civilian survivors who are enrolled in the WTC Health Registry, the largest post-disaster public health registry in U.S. history, tracking the health of more than 71,000 people directly exposed to the WTC disaster. Eligibility criteria for this particular study included a minimum age of 18 years, physical presence in either Tower 1 or 2 between the first plane impact and subsequent tower collapses, and no participation in WTC rescue/recovery activities.

In terms of other demographic characteristics of this cohort of survivors, 58.5% were men and 68.2% were white. However, the risk of PTSD was highest among Hispanics and African Americans. Sixty-seven percent of the survivors were college graduates and 60% had an annual household income greater than $75,000. Sixty-seven percent worked for an employer that sustained fatalities on 9/11.

"PTSD risk was greater among survivors who experienced serious life threat as defined by location in the towers, time of evacuation initiation, or dust cloud exposures," said Dr. Laura DiGrande, DrPH, MPH, Columbia's Mailman School of Public Health doctoral degree recipient for this research and first author of the study. "As one would expect, individuals who were exposed to several of the most troubling and life threatening events during the disaster were at the greatest risk of PTSD." Only 145 or four percent of survivors had no symptoms of PTSD.

"As the long-term effects of the WTC disaster emerge the results from this study suggest that some survivors of the WTC disaster will continue to report psychological symptoms years after their exposure to the events of 9/11. The implication of this finding is that the impact of terrorism on survivors, particularly those in low socioeconomic positions, could be substantial, as PTSD is known to be co-morbid with other disorders and harmful behaviors that affect daily functioning, wellness, and relationships," noted Dr. Sandro Galea, MD, chair of the Department of Epidemiology at Columbia's Mailman School of Public Health and study senior author.

"As disaster literature moves toward understanding long-term risks in the general population, this study reminds us that the relation between direct exposures and PTSD is clear and suggests potential avenues for planning policy to reduce the burden of terrorism-related psychopathology," noted Dr. Robert Brackbill, PhD, MPH, the Registry's founding principal investigator and study coauthor.

As the 10-year anniversary of the World Trade Center disaster approaches, Columbia researchers and the WTC Health Registry are continuing to ascertain even longer term implications.