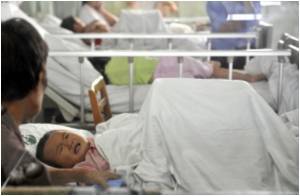 Childhood cancer survivors are at an increased risk of infertility in later life, finds a research.

In a nationwide German survey on infertility after treatment for cancer in childhood and adolescence, the authors collected data from former pediatric oncology patients. Of the 2754 participants, 1476 had been treated for leukemia and 1278 for solid tumors. Altogether, 210 of these former patients had opted to have their fertility tested.

Infertility was suspected in 30% of them. In one subgroup 23% of the responders stated that they and their partner had failed to conceive a child despite at least 24 months of unprotected intercourse, thus fulfilling the World Health Organization's definition of infertility.


In a second investigation, the Berlin hormone testing and sperm analysis study, 201 survivors of childhood cancer consented to fertility testing. Infertility was suspected in a quarter of them.

On the basis of these findings, the authors conclude that patients and/or their parents should be informed about possible fertility-preserving measures before commencement of treatment.

Leukemia is cancer of blood-forming tissues in the body.

Acute lymphoblastic leukemia (ALL) is the cancer of white blood cells characterized by excess lymphoblasts. It is the most common of all childhood cancers and can be fatal in weeks if left untreated.
Advertisement
News A-Z
A B C D E F G H I J K L M N O P Q R S T U V W X Y Z
What's New on Medindia

Vaginitis
News Archive
News Resource
Advertisement
News Category
Why East African Newborns Are at Increased Risk of Birth Defects? Healthy Ways to Get Your Baby Sleep Longer Classmates Sitting Next to Each Other More Likely to Become Friends Developmental Dyslexia Plays Major Role in Human Adaptation Is Headache in Kids a Consequence of Online Classes?
More News
Sign up for Wellness Consult a Doctor Sign up for Selfcare