Cellphone and Its Influence on Brain Cells 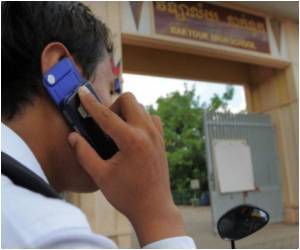 According to recent research in the journal of the American medical Association, temporary changes in the brain cells occur due to usage of cellphones.

The research however does not link cell phones to elevating risks of brain cancer or cause any other abnormality in the brain.

Texting, browsing, playing games, taking directions, listening to music are the things you use your cellphone for.
Advertisement

However, cell phones can cause a momentary increase in the metabolism of sugar in the brain cells present in the region close to the cell phone antenna.


Study author Dr. Nora Volkow, director of the National Institute on Drug Abuse, said, "It's not a dramatic increase. It's more in the range of the brain activation that occurs in, say, the language center when you're speaking.''

Americans Disapprove of Cellphone Use During Meals

A new survey has revealed that majority of Americans do not approve of cellphone use during meals.
Advertisement
47 healthy volunteers took part in the study, and had to undergo brain scanning with Positron Emission Tomography  a test which gauges the assimilation of glucose by brain cells.

The volunteers were also given a cellphone attached to their right ear connected to a recorded call for 50 minutes. The PET scan pointed out a 7% increase in glucose metabolism in areas of the brain near the cellphone antenna.

"I wish my study could enlighten brain cancer risks. But we don't know whether activation from cellphones could be negative, or even whether it could be beneficial, ''Nora Volkow said.