Cases of Measles in US Reach 20-Year High 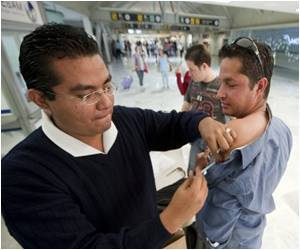 So far, 288 measles cases have been counted in the United States for this year, the most in 20 years and a rise that is driven by unvaccinated people, said health authorities Thursday.

"This is the largest number of measles cases in the United States reported in the first five months of a year since 1994," said the Centers for Disease Control and Prevention.

Nearly all the cases have involved Americans who were not vaccinated against the highly contagious disease, and who traveled abroad and caught the infection in other countries.


Then, they "brought the virus back to the United States and spread to others in communities where many people are not vaccinated," said Anne Schuchat, assistant surgeon general and director of CDC's National Center for Immunization and Respiratory Diseases.
Advertisement
Many of the US clusters originated after people traveled to the Philippines, where a large measles outbreak has been ongoing since late 2013.

"Ninety percent of all measles cases in the United States were in people who were not vaccinated or whose vaccination status was unknown," the CDC statement added.

Eighty-five percent of unvaccinated people said they declined the shot for "religious, philosophical or personal reasons."

The CDC urged people to get vaccinated against measles, which it described as a "serious respiratory disease that is highly contagious."

Worldwide, an estimated 20 million people get measles and 122,000 die from the disease each year.

Childhood Vaccinations-Why Are They So Important?
Know why it's extremely important to get your child vaccinated. Read on......