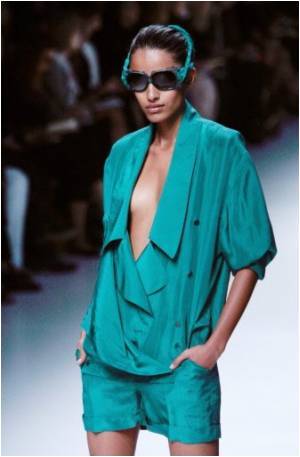 Toxic pesticides, soil pollution and immense wastage of water are some of the fallout of high street fashion on the environment. But can big brands use their global clout to drive the green revolution?

If green is the new black on the high-street, then global retailers are lining up to parade their eco-credentials, from Marks and Spencers in Britain, to sportswear behemoth Nike or the fashion giant H&M.

President Pratibha Patil today stressed the need for food security for growing population and said that there was need for another green revolution.
Advertisement

"There's a paradigm shift in the textile sector," John Mowbray, editor of the green trends magazine Ecotextile, told AFP at the Texworld trade fair in Paris this month.


"Three years ago sustainability was not on the agenda" he says. "Now a lot of retailers and brands want to move regardless of what their suppliers think. They think consumers want transparency. Brands are driving change."

The India-US civil nuclear deal will help New Delhi meet its people's economic aspirations by launching a second Green Revolution, Secretary of State Condoleezza Rice said here Thursday.
Advertisement
Sourcing cleaner fabrics -- from organic yarns to recycled polyester -- and rooting out sweatshop practices in Asia and elsewhere are the twin planks of the sustainability mantra adopted by many of the West's top brands.

And the most visible example of this is organic cotton.

Until recently an expensive rarity, organic cotton t-shirts are cropping up on supermarket and bargain retail shelves, from Tesco or Topshop in Britain to Auchan in France or Primark in the United States.

Global retail sales of organic cotton apparel and home textile goods have been soaring 40 percent per year since 2001, according to the Organic Exchange (OE) non-profit group.

The world's top 10 organic-cotton using brands last year, according to the OE, reads like a Who's Who of the high-street fashion and sports industry, including C&A, Nike, Walmart, H&M, Levi Strauss & Co and Adidas.

The global organic cotton market is still a baby, making up one percent of the total harvest. But the market is booming -- and the growth appears recession-proof.

Last year, even as the economic slowdown sliced seven percent off the global apparel and textiles market, the organic segment grew by 35 percent, with sales of 4.3 billion dollars.

"We weren't affected by the crisis," said H.L. Ding, a Chinese entrepreneur whose natural fibre firm Hemp Fortex turned over 10 million dollars in 2009 selling to the likes of Walmart.

"We're a small part of a market that's still growing."

Short of going organic, meanwhile, dozens of brands and retailers -- who together consume 15 percent of the world's cotton -- have signed up to a global scheme called the Better Cotton Initiative.

Retail giants Ikea and Levi Strauss sit on the council of the scheme, whose first crop is set for harvest in the coming months.

So the figures are impressive. But how much is this really doing to reduce the industry's ethical footprint? Is this real change or mere "greenwashing"?

"Sure, they are buying organic cotton, but at what price, and how is it made?" warned Isabel Quehe, founder of the Ethical Fashion Show which was holding its seventh edition in Paris this week.

Looking beyond fabrics, "consumers need to think about where their clothes come from, whether the person who made them was paid a living wage."

Just this week, a report in France's Liberation newspaper exposed the "prison-like" conditions in a textile complex in southern India that supplies many of the West's top brands, like Gap or H&M.

"I saw an organic t-shirt selling for 2.90 euros -- at that kind of price you can only be producing it in terrible conditions," said Christan Tournafol, one of the designers at the Paris show whose label Les Racines du Ciel sources organic fibres around the world.

But there was also evidence at the Texworld fair that support from big retail partners is helping green, ethical suppliers to thrive.

Some 120 certified organic and fair-trade fabric suppliers made the trip to Paris this year -- double the number a year ago.

"It's not easy for companies to transform themselves," says Bernd Muller, in charge of sustainable textiles at the show.

"There have been problems with whole villages who converted to organic, and ended up with unsold cotton on their hands," added the fair's managing director Marie-Armelle de Bouteiller.

A case in point: JCT Limited ships a million yards of organic yarn each year from the Indian Punjab to clients including Nike and Decathlon.

Under a lock-in deal with Nike, it says it plans to convert huge acreage to organic farming within three years, educating farmers about the technique and pledging to buy their whole crop.

OE research also suggests that organic cotton is being spurred by "strong commitment and support from brands".

"Big companies always tread very carefully but once they feel its right for the market, it can be really big," agreed Hemp Fortex's Ding. "They are taking serious steps."

Quehe believes it is easier for a small firm to be truly ethical, by keeping watch on environmental and labour practices all along its supply chain.

But she concedes that "large firms have the power to set an example."

"Change has been set in motion on a global scale. And the more of us there are, the better."

Many More Brewing Companies Hoisting the Flag for 'Green Beers'

Companies across the world have started producing green beers, which are ecologically sound beers .
Advertisement
<< The Many Faces of Facebook
Osteoporosis Treatment Helped by Protein >>

The Essence of Yoga Calculate Ideal Weight for Infants Nutam (400mg) (Piracetam) Pregnancy Confirmation Calculator Iron Intake Calculator Blood Donation - Recipients Loram (2 mg) (Lorazepam) Hearing Loss Calculator Drug Side Effects Calculator A-Z Drug Brands in India
This site uses cookies to deliver our services. By using our site, you acknowledge that you have read and understand our Cookie Policy, Privacy Policy, and our Terms of Use