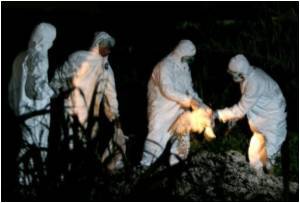 "Although there have been preventive measures taken by specialist institutions, the spread and the rate of human deaths from bird flu is at a worrying level," the order said.

The latest fatality was a 35-year-old man who died this week after eating infected duck.


Friday's directive ordered a mass disinfection of all poultry farms and markets across the country, as well as efforts to monitor birds' health and to stop illicit cross-border poultry transportation.
Advertisement
Health officials have warned people to wash their hands frequently, to keep children away from poultry and to avoid eating infected birds.

The country has seen 30 recorded cases of the H5N1 virus -- all but three fatal -- since a major worldwide outbreak in 2003.

Bird flu has killed more than 365 people worldwide in the last ten years, according to WHO statistics.

It typically spreads from birds to humans through direct contact. But experts fear it could mutate into a form easily transmissible between humans, with the potential to trigger a pandemic.