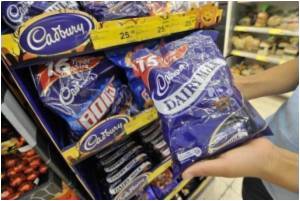 Chocolate giant Cadbury's has done away with the famous "glass and a half" slogan from their wrappers.

Each bar of Dairy Milk now has the words: "The equivalent of 426ml of fresh liquid milk in every 227g of milk chocolate."

Chocolate Eaters Could be Blessed With a Healthy Heart

A new US study has pointed out that people who consumed chocolate above five times a week were 57 per cent less likely to suffer coronary heart disease.
Advertisement

Although Cadbury's has kept the picture of a glass and a half of milk on the packs, it isn't pouring into a choc square any more.

Cadbury's said the decision to alter the wording to metric was taken in 2007, although the wrappers were not changed until recently.

Heart Gets a Boost With Dark Chocolate

Dark chocolate does actually reduce the risk of heart failure, concludes a US study, making all chocolate lovers rejoice.
Advertisement
A spokesman called the change "regulatory" and denied the famous recipe had been changed.

"The phrase didn't make sense if the pack stated the bar weighs 49g or 230g," the Sun quoted him as saying.

New EU rules also mean the firm has been forced to raise the calorie count by five in each 49g bar, by having to count the fibre in each chunk.

A spokesman for American food giant Kraft, owner of Cadbury's, said the company would keep using the phrase in their marketing campaigns.

However, Andy Foster, of the Trading Standards Institute has denied forcing Cadbury's to display the ingredients on the wrapper in metric.

He said: "The Cadbury's slogan is well known by consumers and should not be confused or caught up with food labelling laws.

"The Trading Standards Institute would have no objection to the continued use of the famous slogan unless it was considered misleading by consumers."

Blame your inclination towards chocolates and hybrid cars to your genes, says a new study, which found that clues to consumer behaviour may be lurking our genes.
Advertisement
<< Child's Risk of Drug Abuse Hiked by Father's Incarceration
Nanotechnology Gives an Impetus to Personalized Therapy >>

'Best Chocolate Cake In The World'

The new Nolita eatery, 'Best Chocolate Cake in the World', is living up to its name for, it is truly a dream come true for all chocoholics.
Advertisement
News A-Z
A B C D E F G H I J K L M N O P Q R S T U V W X Y Z
What's New on Medindia