'Best Chocolate Cake in the World' 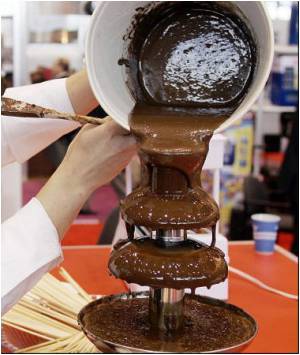 The new Nolita eatery, 'Best Chocolate Cake in the World', is living up to its name for, it is truly a dream come true for all chocoholics.

It is the first 'Best Chocolate Cake in the World'store in the U.S., and since it opened last month, actor Benicio Del Toro has already been spotted buying two cakes.

Chocolate may be Able to Actually Reduce Painful Senstations

A study published Wednesday in the Journal of Neuroscience has found that chocolate activates a part of the brain that blunts pain and makes it difficult to stop eating.
Advertisement

"I just had a food-gasm," the New York Daily News quoted Rocco Cafferelli as saying after taking a bite of the 70 percent cocoa creation on Spring St.


"It was tantric chocolate," he added.

"If I saw Oompa-Loompas in there I wouldn't be surprised," said his buddy Haig Hovnanian, who also lives in Williamsburg, in a reference to the mythical Willy Wonka's Chocolate Factory.

A study has suggested that eating chocolate at least three times a week can help reduce life-threatening conditions from developing in pregnant women.
Advertisement
"It's wonderful," he added.

There are two varieties of cake on the menu: The traditional 55% cocoa, and the bittersweet 70 percent cocoa slice.

"This is awesome," said Luis Cordero from Bronx, after taking his first decadent bite.

"People take the store name very seriously but then they try the cake and I see their reactions, and they say 'Yeah, it's good,'" said store manager Natasha Stefanovic.

"I see people scraping their forks on their plates so they don't leave anything behind," she added.

Britons The True Chocoholics of Europe

Britons splash out the maximum on chocolate than any other European country, it has emerged. A Mintel survey revealed that Britons each spent an average 57 pounds on chocolate
Advertisement
<< Adding Seaweed Extract to Fast Foods Can Make Them Healthie...
Coca-Cola Criticized for Using Pornography in Internet Campa... >>

More News on:
Caffeine and Decaffeination Food Combinations that Affect Your Well-being Dark Chocolate vs. Milk Chocolate vs. White Chocolate Foods to Avoid to Keep Acid Reflux At Bay