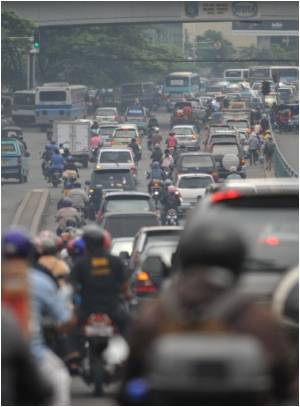 In a new study that was carried out in shantytowns near Lima, Peru have shown that teenagers who live next to busy roads are at a greater risk of developing allergies and asthma.

The findings show that the risk of developing allergies to dust mites, pet hair and moulds can go up by 30 percent, while the risk of asthma symptoms, such as wheezing, can double.

The study is thought to be the first to link heightened rates of allergic disease and exposure to traffic-related pollution as a possible reason for increased rates of asthma along major transit routes.


According to experts at Johns Hopkins, no study has until now looked at how busy roadways affect the allergic origins of asthma.

An allergy is a hypersensitive disorder of immune system. Substances that often cause allergic reactions are pollen, dust mites, mold spores, pet dander, food, insect stings and medicines.
Advertisement
It found that the risk of having an allergic disease (atopy) and asthma was worst for those living immediately next to a busy road, where a steady stream of traffic across multiple lanes flowed unimpeded all day long.

"Family physicians and public health workers now know they need to more closely monitor children who live near major roadways for allergies and for the earliest signs of asthma," he said

The researchers are now planning to carry out further studies on the underlying genetic profile of those at greater risk of atopy and asthma.

"Our ultimate goal is to identify other key environmental stimuli or traffic-related pollutants that help trigger allergic disease, and then use our knowledge of how they work biologically to stop them before asthma sets in," said Checkley.

The study is published online in the Journal of Allergy and Clinical Immunology.

Come winter and asthma is back with renewed vengeance. With air pollution ever on the rise and our everyday surroundings abounding in common allergens, it's best to stay informed on this respiratory condition so that you don't trigger off another asthma attack unknowingly. Let Christmas celebrations take your breath away, not asthma!
Advertisement
News A-Z
A B C D E F G H I J K L M N O P Q R S T U V W X Y Z
What's New on Medindia