British Woman Falls Out Of A Spanish Hotel Window While Sleepwalking 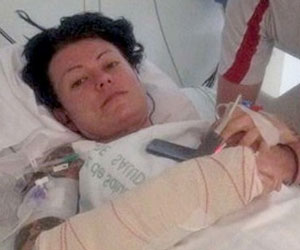 Amy Wigfull, a 24-year-old British woman, fell 50 feet out of a Spanish hotel window while sleepwalking and was put on life support in the intensive care unit.

In the accident, she fractured her back, pelvis, ribs and shoulder and got her lungs and teeth injured. She also bled from her brain.

Sleepwalking or "Somnambulism," is a type of parasomnia and has medico-legal implications
Advertisement

Amy Wigfull hails from Sheffield, South Yorkshire, and was on a family vacation in Malaga to celebrate her mother's 40th birthday when she sustained the fall.


In the wee hours of Sunday, she allegedly walked into the bathroom and jumped 5 storeys out of the window landing on the ground suffering serious injuries.

Educating the patient, the bed partner or care taker is important for the management of Parasomnias
Advertisement
Ms. Wigfull tested negative for drugs and alcohol in the toxicology tests.

She supposedly needs at least a series of four operations, which the doctors wait to perform after her condition stabilizes.

Her cousin Claire Duffy said: "We think the fact that she was asleep is the reason why she fell so gracefully if you like.

"She wasn't trying to stop herself from falling. It's an isolated incident. She's never done it before.

"Amy doesn't know, she's speaking at the moment, asking, 'What happened mum? Where am I? Why am I in the hospital?'

"I'm glad that's the last she knew, because obviously if she was awake when she fell five floors, it's just horrendous."

Ms Wigfull did not pay for her holiday insurance, and so her family plans to raise 20,000 euros to cover her operation cost.

Ms Duffy is overwhelmed at the receipt of donations worth £2,500 so far towards Ms Wigfull's care.