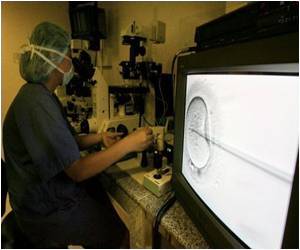 They are about to request a licence from the UK fertility watchdog to fertilise the first human egg cells, which have been grown entirely in the laboratory from stem cells.his could revolutionise fertility treatment and might even lead to a reversal of the menopause in older women.

The eggs could be fertilised later this year as part of a series of tests to generate an unlimited supply of human eggs, the Independent reported.


Producing human eggs from stem cells would also open up the possibility of replenishing the ovaries of older women so that they do not suffer the age-related health problems associated with the menopause, from osteoporosis to heart disease.
Advertisement
Some scientists are even suggesting the possibility of producing an "elixir of youth" for women, where the menopause is eradicated and older women will retain the health they enjoyed when younger.

Researchers at Edinburgh University are working with a team from Harvard Medical School in Boston to be the first in the world to produce mature human eggs from stem cells isolated from human ovarian tissue.

Until now, it has only been possible to isolate a relatively small number of mature human egg cells directly from the ovaries of women who have been stimulated with hormones. This technical limitation has led to an acute shortage of human eggs, or "oocycts", for IVF treatment as well as scientific research.

The scientists want to fertilise the laboratory-grown egg cells with human sperm to prove that they are viable. Any resulting embryos will be studied for up to 14 days - the legal limit - to see if they are normal.

These early embryos will not be transplanted into a woman's womb because they will be deemed experimental material, but will either be frozen or allowed to perish.

Evelyn Telfer, a reproductive biologist at Edinburgh University, has already informally approached the Human Fertilisation and Embryology Authority (HFEA) with a view to submitting a formal licence application within the next few weeks.

"We hope to apply for a research license to do the fertilisation of the in vitro grown oocytes within the IVF unit at the Edinburgh Royal Infirmary," Dr Telfer said.

"Could the fertilisation take place this year? Yes, absolutely," she said.

Professor Richard Anderson of the MRC Centre for Reproductive Health, who will be in charge of the clinical aspects of the work, said: "The aim will be to demonstrate that the eggs that we've generated in vitro are competent to form embryos and that's the best test that an egg is an egg,"

Generating an unlimited supply of human eggs and the prospect of reversing the menopause was made possible by a series of breakthroughs led by Professor Jonathan Tilly of Harvard.

In 2004 he astounded the world of reproductive biology by suggesting that there were active stem cells in the ovaries of mice that seemed capable of replenishing eggs throughout life.

For half a century, a dogma of reproductive biology was that women are born with their full complement of egg cells, which they gradually lose through life until they run out when they reach the menopause.

"This age-old belief that females are given a fixed 'bank account' of eggs at birth is incorrect," Professor Tilly said.

"In fact ovaries in adulthood are probably more closely matched to testes in adulthood in their capacity to make new germ cells, which are the special cells that give rise to sperm and eggs," he said.

"Over the past 50 years, all the basic science, all the clinical work and all the clinical outcome was predicated on one simple belief, that is the oocyte pool, the early egg-cell pool in the ovaries was a fixed entity, and once those eggs were used up they cannot be renewed, replenished or replaced," he added.

Last month, Professor Tilly published pioneering research showing that these stem cells exist in human ovaries and that they could be stimulated in the laboratory to grow into immature egg cells.

He is collaborating with Dr Telfer, who was once sceptical of his research, because in Edinburgh she has pioneered a technique for growing immature eggs cells to the fully "ripened" stage when they can be fertilised.

"It's been fun to work with her because she's been one of the most vocal critics of this work years ago and it's great that she's come about and changed her views," Professor Tilly said.

"I think personally [fertilising the first eggs] is do-able. I see no hurdles why it cannot be done this year," he added.

Dr Telfer continued: "The important thing is that if you can show you can get ovarian stem cells from human ovary you then have the potential to do more for fertility preservation.

"We have all the local ethical approval in place and we're now looking at the process of the HFEA application. There is a push for us to do it now," she added.

Quiz on Infertility
Obesity negatively affects fertility in females. Find out why fat women have lesser chances of ......

Zinc Plays Crucial Role in Fertilization of Healthy Eggs
Scientists have found that healthy eggs need a tremendous amount of zinc to reach maturity and be .....