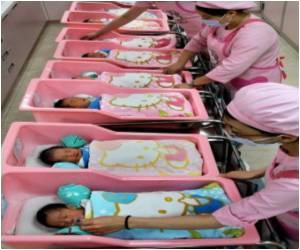 The crude birth rate, based on the number of childbirths per 1,000 people each year, came in at 0.721 percent in 2010, compared with 0.829 percent the previous year, according to data posted on the interior ministry website.

Teen Birth Rates Fall To Record Low In US, But No Room For Complacency

The teen birth rate in the U.S. has fallen to a record low, according to a report from the Centers for Disease Control and Prevention, but there is no room for complacency, warn experts.
Advertisement


Interior ministry officials said some parents were anxious to avoid having children in 2010, which in Chinese tradition was the Year of the Tiger, deemed one of the fiercest astrological signs.

Detailed look at Early pregnancy Symptoms and easy health solutions during 1st, 2nd and 3rd trimester of pregnancy. With an addition of an online pregnancy due date calculator.
Advertisement
Meanwhile, the number of people aged 65 and over accounted for 10.74 percent of the island's more than 23 million population, above the 7.0 percent level at which a society is defined as "ageing" by the World Health Organisation, the ministry said.

The new numbers alarmed Ma when he was given a preview of them by Interior Minister Chiang Yi-hua earlier this week, local media reported.

"President Ma said the government must not sit idle and demanded that 'national security-level' measures be taken," the minister said.

Taiwan's authorities have offered incentives to try to boost birth rates, amid growing concerns that a severe manpower shortage will trigger serious social and economic problems.

Under the plan, parents will be entitled to a minimum monthly subsidy of Tw$3,000 for each newborn up until two years old and an annual schooling stipend of Tw$30,000 for children aged two to six.

The government hopes to encourage the public to have more children during the Year of the Dragon in 2012, which is considered the most auspicious year in the Chinese zodiac and a favorite birth sign for children, the media said.

South Korea has a very low birthrate that it hopes to boost up and also take care of an ageing population in the next five years with a funding of 75.8 trillion won (67.8 dollars).
Advertisement
<< Secret of Trojan Horse Viral Gene Revealed
Molecular Medicine Could Avert and Restore Vision Loss >>

In a new study it has been found that even though babies are too young to talk, they can understand words and process them in a grown up way.
Advertisement
News A-Z
A B C D E F G H I J K L M N O P Q R S T U V W X Y Z
What's New on Medindia

Post-Nasal Drip Turmeric Powder - Health Benefits, Uses & Side Effects Hearing Loss Calculator Blood Donation - Recipients Daily Calorie Requirements Calculate Ideal Weight for Infants Find a Doctor Drug Interaction Checker The Essence of Yoga Noscaphene (Noscapine)
This site uses cookies to deliver our services.By using our site, you acknowledge that you have read and understand our Cookie Policy, Privacy Policy, and our Terms of Use  Ok, Got it. Close
×