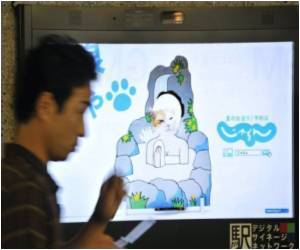 Digital posters that recognize people's faces are being on demand. Advertisers are working on these posters and respond by flashing ads according to customer's taste.

The technology is so sophisticated that it could soon even be possible to link the posters to a store's profile of each individual and display goods that would appeal just to them.

Digital advertising billboards being trialled in Japan are fitted with cameras that read the gender and age group of people looking at them to tailor their commercial messages.
Advertisement

The posters recall the famous scene in the 2002 science-fiction thriller 'Minority Report', in which Tom Cruise walks past a row of digital signs which scan his retina and display holograms of products that he likes.


The technology works through cameras attached to the billboards, which scan to see if passers-by are looking in their direction, and they will then work out whether or not that person is male or female.

Some of the desperate and dateless singles have put themselves across six billboards Down Under, in a bid to find love.
Advertisement
The technology can also recognize subtle facial expressions, such as a raised eyebrow or a frown.

As the billboard cameras become increasingly sophisticated they will be able to recognizes more telltale signs that could pinpoint the type of consumer each passer-by is.

The company paying to advertise on the virtual billboard could then tailor a specific product to the passer-by accordingly.

The scanners also pick him up when he enters a Gap store and show him an image of a woman selling him clothes.

So far the most advanced posters allow shoppers to see what clothes would look like on them by superimposing the items on a digital picture of themselves.

Interactive advertising agency R/GA has already put a series of such devices in the children's section of U.S. clothing retailer American Eagle Outfitters, but it hopes to take them far further.

"What we are trying to do is figure out what your brain is doing," the Daily Mail quoted Benjamin Palmer, chief executive of advertisers Barbarian Group, as saying.

"If you want to do something evil with it, I'm sure you could. It is the same thing with anything else technology-wise," Palmer added.