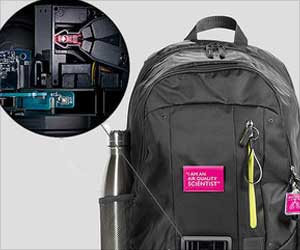 A woman from Delhi carried out an unique experiment to gauge the hazardous levels of polluted air in Delhi and surrounding areas. She wore a backpack with novel air sensing technology, which has revealed disturbing data of both outdoor and indoor air pollution.

Delhi-based Karuna Chauhan tracked the air pollution exposure throughout her daily routine in phases on the months of October-November: the peak of air pollution in the capital -- and found that the pollution level increased with time.

Nearly 2.4 million deaths every year are attributable to air pollution. Air pollutants may be solid particles, liquid droplets or gases. Proper planning methods should be adopted to reduce air pollution.
Advertisement
‘Air pollution hits homes every year with the onset of winters, which bring a thick smog cover, making it a hazard for everyone.’


Chauhan wore the backpack on October 3 (phase 1) and then again on November 8 (phase 2), repeating the same activities and routine, which included cooking at home and yoga in the park.

Breathing in unclean air due to increasing air pollution could cause kidney damage with resultant kidney failure according to a recent epidemiologic study.
Advertisement
Compared to phase 1, the pollution data collected in Phase 2 indicated a significant increase in PM2.5 levels, with average levels rising by 459 percent.

These levels remained high both indoors and outdoors, irrespective of the activity taking place.

Actions like frying food in the kitchen caused a five-fold increase in PM2.5, while visiting an outdoor market caused NO2 levels to rise to 2,500ppb, which registers as very poor on the AQI scale.

Karuna's exposure to PM2.5 and NO2 pollution peaked while she was driving on the Gurugram-Delhi expressway, the report found.

"This is unsurprising as these are pollutants commonly associated with vehicle emissions as well as brake and tyre wear," the findings showed.

The air quality backpack was developed by Dyson engineers for the Breathe London study with King's College London and the Greater London Authority.

"Using our unique algorithm to process detailed reports of air pollution exposure, this innovative technology allows us to monitor air quality indoors, outdoors and on the move. What's more, it all fits within a backpack," Alex Knox, Vice President of Environmental Care at Dyson, said in a statement.

The company engineers analysed the findings by pairing the air sensor and GPS data from the backpack with Chauhan's diary entries, where she documented her activities and observations in the period wearing the air quality backpack.

This allowed them to understand what may have caused the pollution and how Karuna might be able to lower her exposure in the future.

"The reality of air pollution hits homes every year with the onset of winters, which bring a thick smog cover, making it a hazard for everyone," Karuna, who is among a group of volunteers and journalists globally working with Dyson to raise awareness about air pollution, said in a statement.

World Environment Day - Together, We Can Beat Air Pollution

World Environment Day (WED) observed annually on the 5th June aims to spread awareness about the dangers of environmental pollution and is a wake-up call to all of us to do our part to preserve and protect our environment.