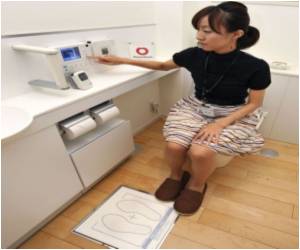 An incontinence devices that combine a diaper with a personal bidet, removing waste before cleaning and then drying the wearer as they sleep was showcased by Japanese firms.

A number of companies taking part in this year's International Home Care and Rehabilitation Exhibition in Tokyo had their automatic toilet-cum-washlets on display, aimed at Japan's burgeoning senior care market.

South Korean authorities revealed that they will be spending over half a million dollars on the construction of floating toilets around shellfish farms.
Advertisement

Salespeople demonstrated how a U-shaped cup fits between the wearer's legs and contains a sensor that activates a suction mechanism when triggered.


Waste is moved rapidly away from the body before a bidet spray-cleans and then blow-dries the area.

The cup is connected to a duct which moves the waste into a tank.

Improper hospital hygiene has forced some nurses to clean toilets and mop hospital floors, a survey of 1000 NHS nurses has revealed.
Advertisement
"This machine is intended to ease the burden for caregivers, especially at night, and it also helps those in bed stay clean," said Daizo Igawa, manager of Muscle Corp, as he demonstrated the firm's "Robohelper" automatic toilet.

The demand for incontinence products in Japan is rising as the population ages, and a change in public insurance schemes now allows this kind of device to be rented.

Tokyo-based Mammary, which also markets gloves to aid breast self-examinations, sells its "Smilet" at 580,000 yen ($7,470), a price the company recognised was beyond the reach of many families.

"Now you can rent one under the insurance programme at 3,000 to 4,000 yen a month," salesman Yamato Ishitate said.

An official said that bio-toilets have been introduced in rural homes.
Advertisement
<< Ahead of Hajj WHO Advises Saudis
Rise in West Nile Virus Deaths >>

Lavatories as Precious as Diamonds in Japan

Nutam (400mg) (Piracetam) Drug Side Effects Calculator Hearing Loss Calculator Iron Intake Calculator Blood Pressure Calculator Accident and Trauma Care Vent Forte (Theophylline) Find a Doctor Find a Hospital A-Z Drug Brands in India
This site uses cookies to deliver our services. By using our site, you acknowledge that you have read and understand our Cookie Policy, Privacy Policy, and our Terms of Use